It’s just one of those morning runs / stroll in a new place where we just aimlessly go around the city; lucky if we could chance upon a running spot. And, that’s how we met Bang Chi Dan Khu Vui Choi Cong Vien Thong Nhat (google search results say it’s other easier name is “Union Park” or “Thong Nhat Park”).

This park is built around a lake, Bay Mau Lake.

Entrance fee to the park

Lake is something common in Hanoi. There are a few interesting spots in Hanoi that is near / around a lake. I guess the most popular one is the Hoan Kiem Lake.

The other lake we had been to was Ho Tay Lake or West Lake. Each of the 3 lakes has its own charm but if I could only go to one lake, I’ll pick West Lake.

I’m getting far away but I mentioned the other 2 lakes because they have no entrance fee, unlike in Union Park. =) In case you wanted to skip the entrance fee, you can check the other lakes. =)

Running around the Thong Nhat Park, aside from their Pho and other yummy foods, it looks like Vietnamese love to exercise… 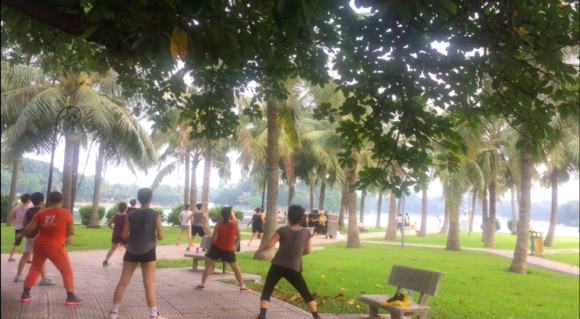 …as well as lounging with their Vietnamese coffee or juice or beer or whatnots.

Exiting the park, we continued just strolling around the city. Here are some more random photos.

Semi #bloggerpose because this might be a Holy place. sorry for my ignorance.

We thought of having breakfast at the famous Bun Cha restaurant where Barrack Obama dined but it was still closed.

So we ended up with pho, which is always never a bad idea!

And since we’re in Vietnam, then we must act like Viets; we must not skip their national activity which is lounging by the side of the street. This is what you call, “life is good”!

View all posts by owrange →
The teams that made me
[Race Story] Hunat Sugbu 9: Tailing