When we trekked our way to Kiltepan View deck (Kiltepan story here >>), we met two locals who we asked for recommendations for places we can trek in Sagada. Two of their suggestions were Kamanbaneng Peak (popularly known as Marlboro Hills) for sunrise, and Mt. Ampacao for sunset.

So the following day, we started trekking very early from our place, so we could catch the sunrise at Kamanbaneng Peak.

The detour to the Marlboro Hills is just across the detour to Kiltepan Peak so it’s pretty easy to spot. From the highway to Marlboro Hills, the distance is probably not more than 3KM; so a total of more or less 5KM out-and-back. From the detour, it was a dirt road wide enough to accommodate a car but then would thin out to just walk paths wide enough to accommodate humans; but this was 2016, 3 years ago.

But I hope they kept the trail that way, just perfect for human feet. I guess I really for the journey over the destination. I don’t know if it’s anti-development, but it’s nice for the trails to remain trails, and not become concrete roads. Or, we can always have the two, a trail and a concrete road. =)

Since we started so early, it was still dark. I could not help but feel a bit scared as the whole route was  surrounded with bushes and trees, and there was no one around except us. =)

I mean if my “journey” is like this, I just want it to be delayed for a little while.

We reached the Kamanbaneng Peak when the sun just started to peek.

The sunrise and sea of clouds may not be as dramatic in Kiltepan Peak, but Marlboro Hills also has its own charm.

Plus factor that there was no crowd there. Aside from us, there was another couple with their guide, and a lone vendor. But this was 3 years ago so the situation might be different now. =)

This was a popular spot for photo ops but I was too scared to do it. 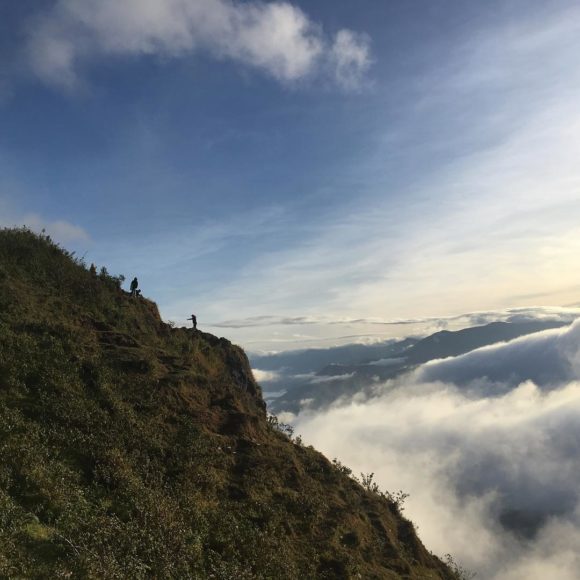 So let me just do this…

The day light was full on when we trek back to highway so it was no longer scary. It was more enjoyable. =)

Somewhere near the entry from /exit to the highway