Finally, 2 peaks in the bag on our 2nd attempt.

Here’s a different roller-coaster ride you can do in Lantau Island, Hong Kong, and it has no entrance fee, hashtag #TipidTips: trekking Lantau Peak (934M) and Sunset Peak (869M). For a seasoned trekker / trail runner, it can easily be done in half-day or less doing 2 peaks so you could just hop on a plane then trek them, then go back home after. =) For my “status,” half-day for each peak; so around 8 hours.

On our first attempt, we tackled the Sunset Peak first, then proceeded to Lantau Peak as we were planning to end in Ngong Ping Village, where the famous big Buddha is. But just 200 meters before reaching the Lantau Peak, I literally cried, decided to quit, and trace the path back to the main road, where we started for the trek. I backed out not because it was difficult, but because of almost-zero visibility. It was my first time to trek with the surroundings covered with very thick fog that it was hard to see what was ahead plus the sound of very strong wind; it scared the hell out of me. 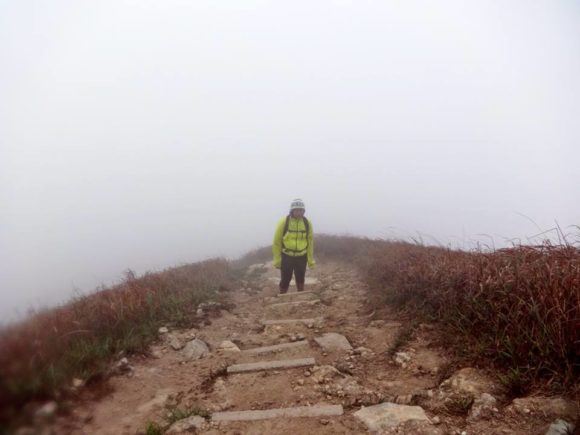 On our 2nd attempt, we tackled the Lantau Peak first because “unfinished business.” Thankfully, the weather was less dramatic this time, and I guess I’d been trekking for some time already, been through a few “buwis-buhay” trails of beloved Philippines that Lantau Peak was less scary for me this time. 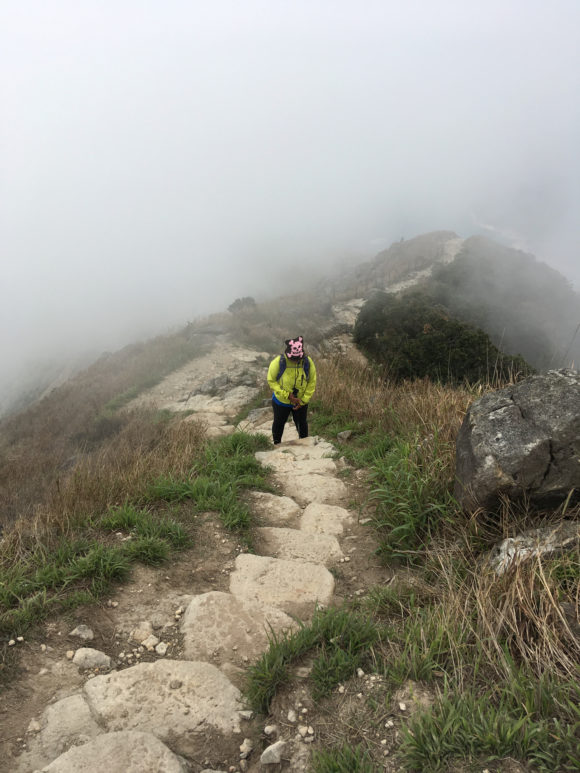 We stayed in Mui Wo, near the ferry and bus terminal. If you’re staying in HK Central, and you took a ferry to Lantau Island, it’s most likely that you would land here (then get into Bus 1 to go to Ngong Ping Village).

There’s a trail around the Ngong Ping village. Just go through it, then you’ll pass by directional signs to the trail head of Lantau Peak.

There are a lot of informational materials along the way. Of course, you can always download the GPS map in advance.

Since 1st world, they can afford to mark well the trail pathways. There’s just no reason why you could not do this.

Typical Hong Kong trail is the presence of stairs, which can be a boon or a bane.

Last stretch to the Lantau Peak, this time I realized that it’s not scary at all. =)

The most backdrop I got from the Lantau Peak. 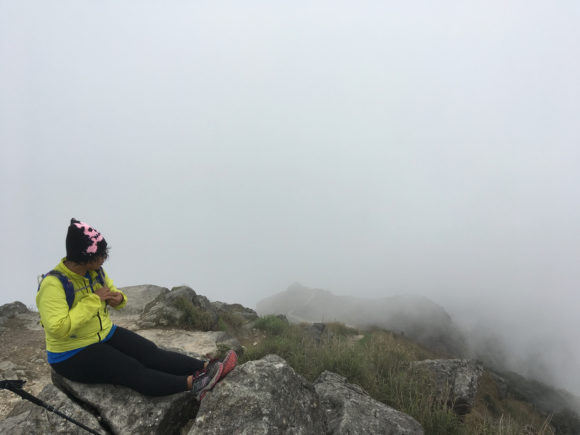 Now going down to the other side looks more tame.

After the rolling hills, we ended on a highway; it’s like basically the end of Lantau Peak trek for us.

SUNSET PEAK
Then, going across the road is the trail head for Sunset Peak.

Trail head to Sunset Peak after ascending from Lantau Peak

Compared to Lantau Peak, the trail path to Sunset Peak is not that steep. It’s kind of “rolling hills” but then I was tired already after Lantau Peak so the rolling hills feels like “hell” to me already. 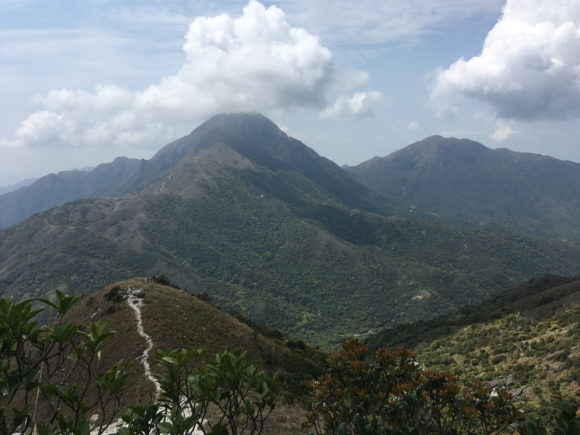 The first time we trekked this trail, it was so foggy so I did not get to see the ocean view. 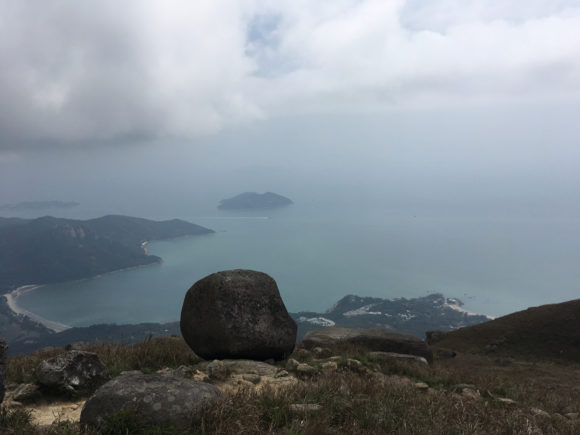 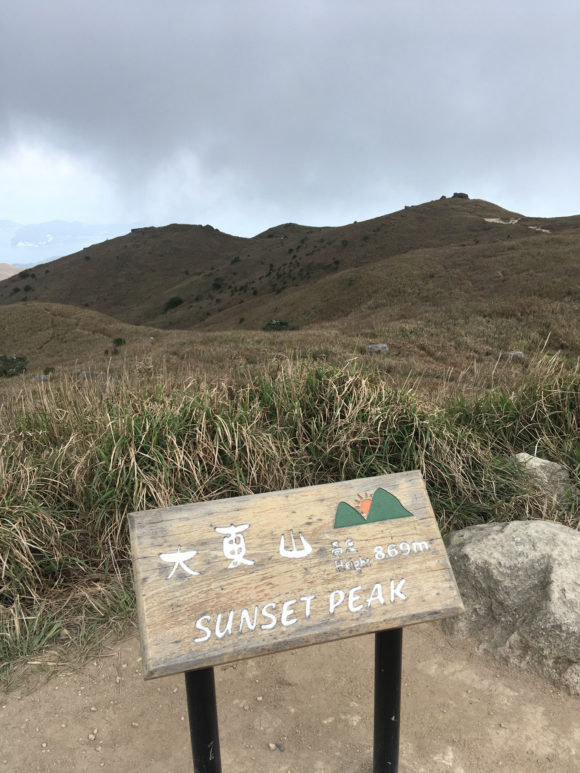 A clear backdrop from Sunset Peak

Finally, we’re going down, out of the trails, out of the woods but first let me tackle yet another set of rolling hills. 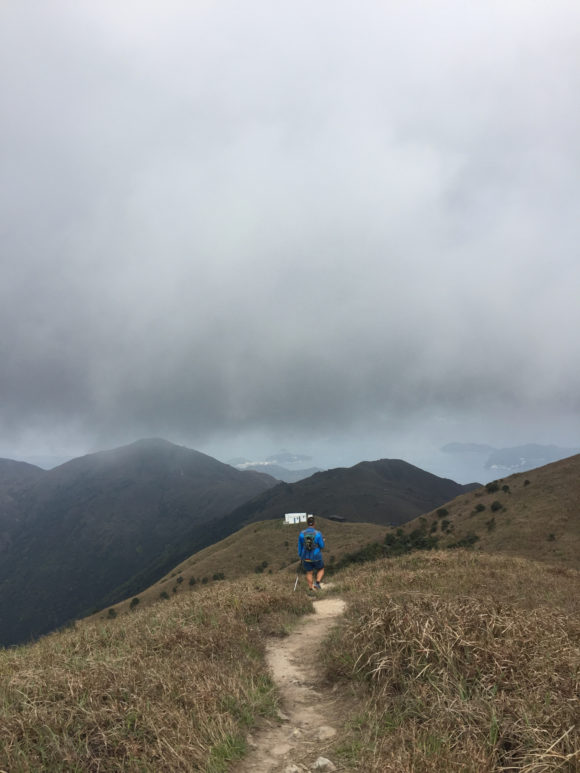 That tree with flowers is something familiar along the trail. It has that minty, something like White Flower smell.

Highway, where are you?

We can actually ride a bus from this point but… 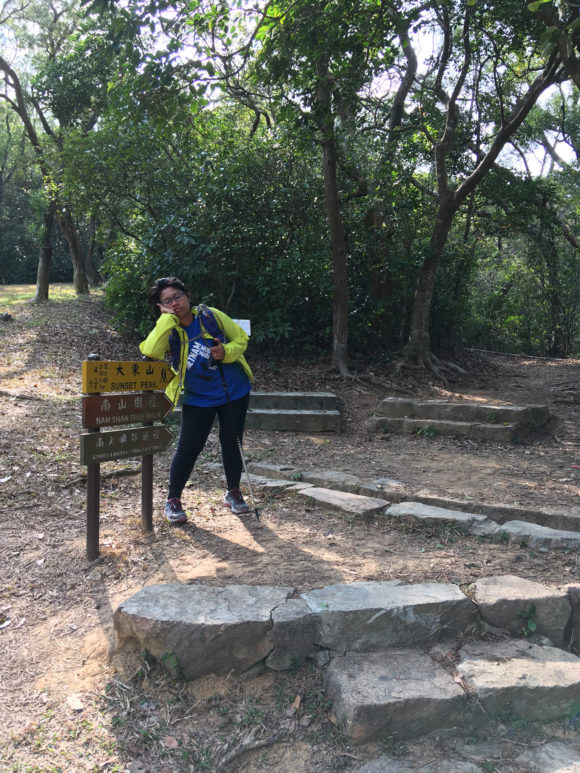 BUS, please!!! Trail head to Sunset Peak, nearer to the Port / Bus Terminal. You can actually just walk to here from the port, like 1.5KM (not sure).

… Mark said we’d be more nearer to the 711 if we just trekked it all the way down to the town center of Mui Wo.