The 7th edition of SM2SM Run was the first time I was able to join this one of the popular races / fun runs of Cebu City; and, I only had 1 goal, to get a 3-hour time for my 21K.

I’m one of those lucky women who are able to sign up for the AWUM 6 (All-Women Ultramarathon) this March 2017. And, somehow I need to get a “decent” time (decent to my standards) in this SM2SM just so I could have a gauge of how I would fare in my upcoming 50KM ultramarathon. It’s more than a year that I had join an official race of more than 21KM distance. I think the last longest distance I had was the 42KM Cebu City Marathon 2015, that was 2 years ago. So I no longer have an idea of how I would handle an ultramarathon distance.

So the goal is 3-hour because that means if I could finish the 20K in 3 hours, I have 7 hours for the remaining 30KM of the 50KM distance. It’s not very safe. It’s “tingbitay” kind of performance, but then that’s how I’m always in running, be it fun run or ultramarathons.

So race day last Sunday, I was in a serious mode. I need to be strict about running this SM2SM 21K.

And somehow the universe heard my wish / goal, and put things into places. Usually, at the start of the race, the first thing I would do is spot a runner or a group who looked like they’re following a certain run-walk pace and just follow them.

I spotted 2 runners who were very in sync, and they’re on a pace I could keep up. It happened that they were being paced by an old good friend, Garces. They said they’re goal was 3-hour. I was just so happy. All I need is to hold on to this group until the very end by hook or by crook! But still getting your goal meant some sacrifices. It means I need to give up a few things that I really love to do on fun runs like: SELFIE. This was so hard to give up especially when you are with the “cool kids.” =)

But I have to take just a few because they’d been a big help in getting my time by clinging on this group for the most part of the race. I got extra reassurance that everything would really be fine when I got to be alongside with the veterans. =) 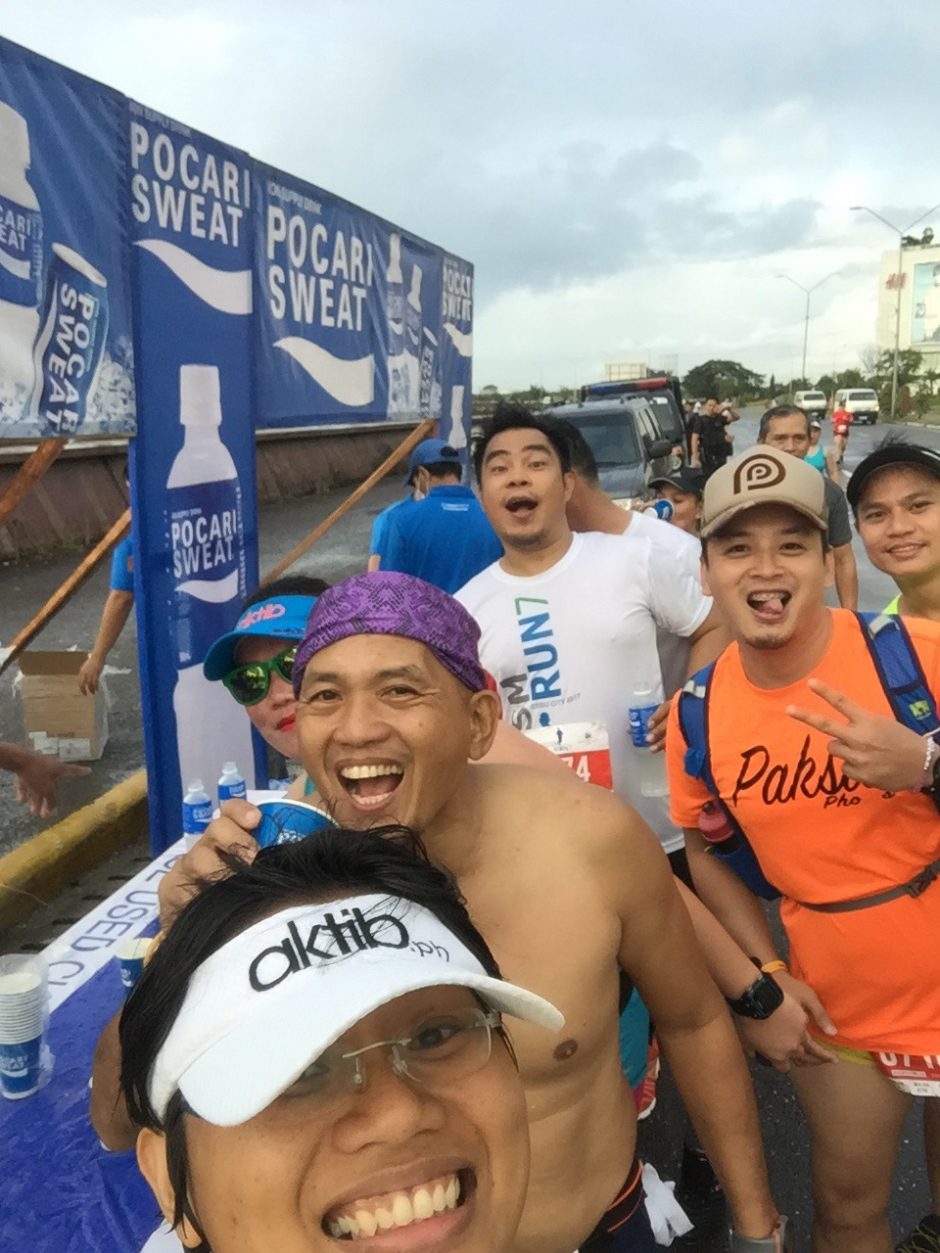 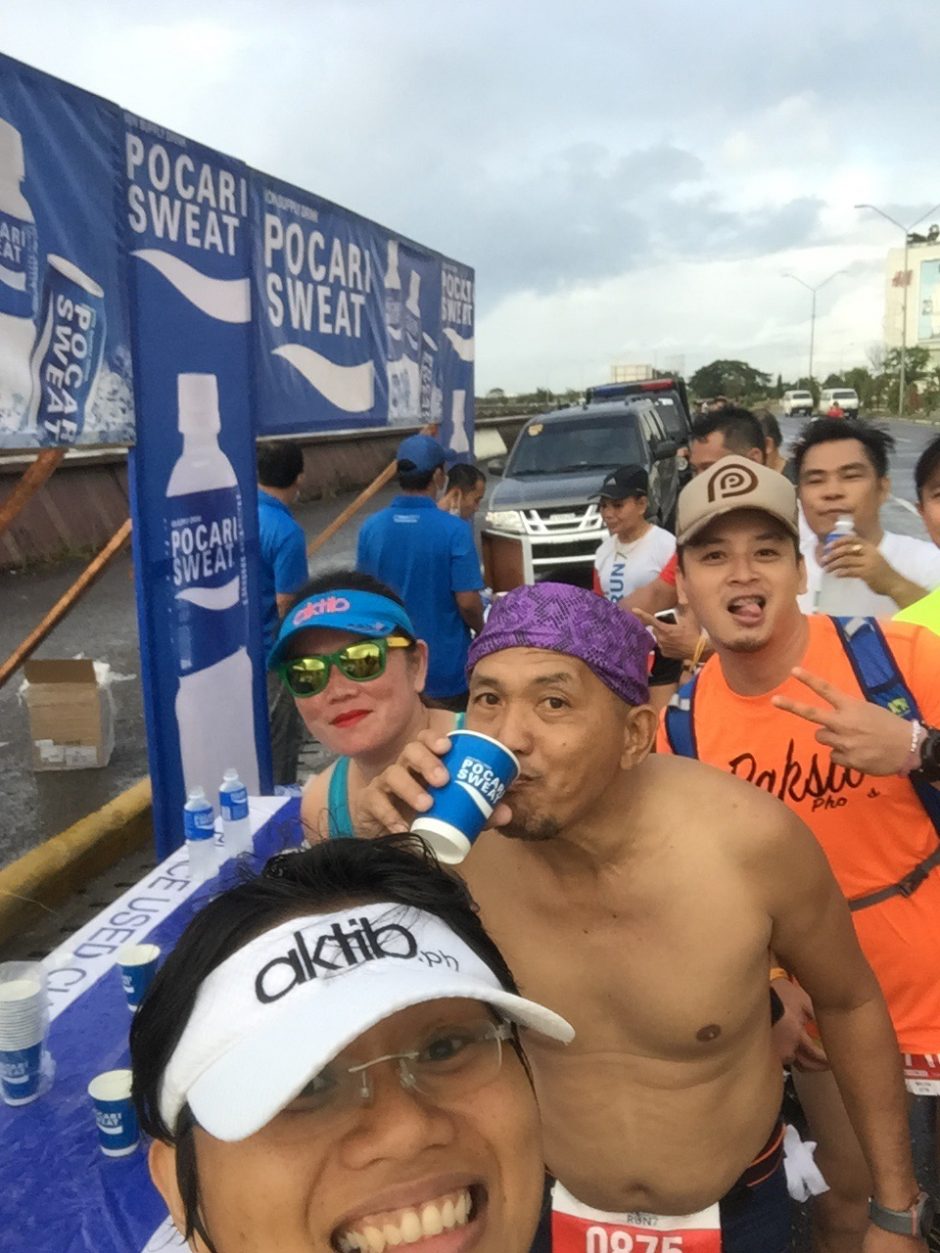 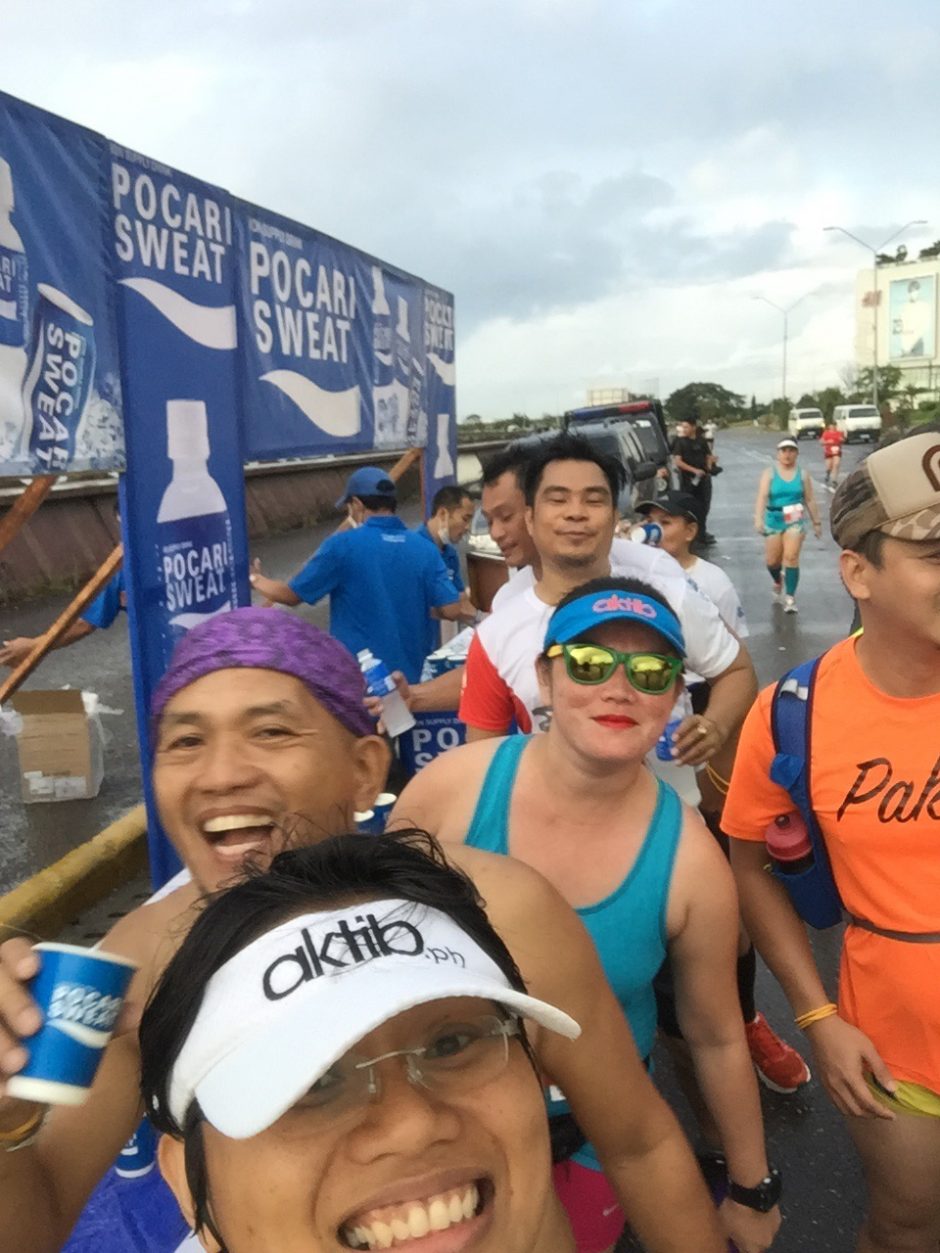 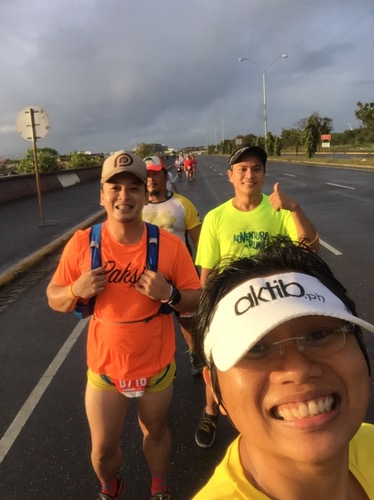 I swear there was a rainbow at our back. Menchu & I swore to each other under the rainbow that we’ll not do any suicide runs any more (“Suicide runs”: running without practise.). I also had to give up ChitChat. I could be the biggest chatter on fun runs especially when reaching the “zombie” zone (“Zombie” zone: the last stretch of the race where a lot of runners would just take a walk to the finish line because we’re injured or got bonked.). So seeing the “last 5KM” signage, I put on the earphones so I would not be tempted to be talkative; pull down my visor to block my view from seeing “relaxing” runners and be tempted to walk along with them. I tried the hardest to just trod on, trying to run as much as I can raise my leg enough to make a “running” action.

But I could never give up a good photo shoot opportunity.

“Should I stop and pose or not?” should never be a question. Sorry, boys at my back. This is my moment! Precision #fashionblogger-ing at the fun run: when you have that few seconds to get the pose right. Of course, it can only be possible with a veteran talented photographer. =) So there, that was a few precious seconds worth GIVING UP for. =) Thank you, and congrats to everyone! For the official top winners of the SM2SM 7, results are posted in the official SM City Cebu page >>.

———-
Planning to run in Cebu? Search for a place to stay below:

View all posts by owrange →
The Ultimate Thing To Do in Consolacion, Cebu…
[Running Photos] The 7 Types of Running Shorts in SM2SM 7 2017 Run