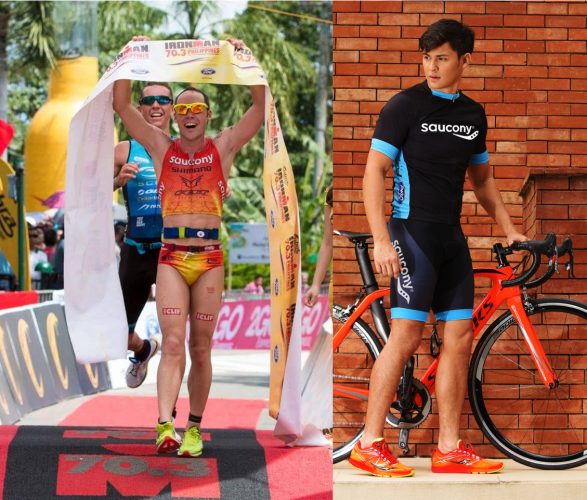 Having the 2015 pro male champion Tim Reed in Team Saucony, it is definitely a team to look forward to this Cobra Ironman 70.3 Asia Pacific Championship (Presented by Ford).

Saucony will be in full force in the Cobra Energy Drink Ironman 70.3 Asia-Pacific Championship presented by Ford on Aug. 7 at the Shangri-La Mactan Resort & Spa in Lapu-Lapu City, Cebu.

Leading the charge for the team is the defending champion of the Asia-Pacific 70.3 Championships Tim Reed of Australia, who will be up against top-tier professional triathletes from all over the world. Saucony also has a notable addition in the roster this year, with the entry of the newest ambassador and local celebrity, Matteo Guidicelli, who hails from Cebu. “This year, my main race is going to be the Ironman in Cebu. I planned out my schedule for that, so hopefully I’ll do okay.” said Guidicelli.

He believes that high-performance brand Saucony is the perfect partner for his daily runs and has shared a particular experience where Saucony’s award-winning technologies helped him conquer the 21-kilometer run leg of the Subic Ironman relay last March, bagging second place with teammates Dyan Castillejo (swim) and Noel Salvador (bike).

“I haven’t been getting sore. The parts where I usually get sore because of the shoes, it doesn’t happen with Saucony because they’re just right in the right places.” said the 26-year-old Guidicelli.

Guidicelli embodies most of the triathletes who has a hectic schedule but still finds time to stay fit and do triathlon.

“I guess I have a good group around me that organizes everything. I just love what I do. I don’t do it because I have to, I do it because I love to,” he said. “Triathlon is important to me because I get to meet so many awesome people.”

The other very strong athletes who are ambassadors of Saucony are: You can learn more about these athletes’ choice of running shoes by visiting the Saucony booth at the expo area of Cobra Ironman 70.3 Philippines at the Shangri-La Mactan Cebu from Aug. 3 to Aug. 7, 2016. The attendees get the chance to meet the world’s best triathletes, and shop among the latest and hottest triathlon gear. Discounts up to 50% are up for grabs!.

View all posts by owrange →
Finding (nem)Osmena Peak
Meet the “Strong” of the Champion: Saucony