Not all who wander are lost…

In our case, we were really lost. Worse was that we had a lame reason of getting lost, and worst was that we just get started with the trek. We were just into the first kilometer of the route, and we’re going nowhere. We were literally beating around the bush. As if nature wants to rub salt on our wounds, it rained hard while we were beating around the bush. Or was it the other way around, the bush beating us around. We kind of surrendered to the thought that it was just not our day. But the Badian girl in me would not give up yet. I wanted to prove that I could go to the Osmena Peak from my hometown instead of the popular entry, Mantalongon, Dalaguete. I want to find as many entries from my hometown.

Dalaguete and Badian are parallel to each other thus both shared the mountains in their borders. People in Badian would even claim that Osmena Peak is actually part of Badian. It’s said that Osmena Peak is one of the hills of Brgy. Patong in Badian. “Patong” roughly means “on top of each other or on top of the back” — like those little hills on top of the mountain you can see from the peak. But people of Badian said that OPeak becomes part of Dalaguete because they did not really give much attention on that one hill among their many hills. Badian does know how to let go and move on. =)

We had done the Kawasan – Osmena Peak route. Though we exited at a different point because I was just too tired to return to the Kawasan trail. We use a local’s directions in going up, and relied on Cebu Trail Runner’s Meyux’ GPS trace in going down. Guess which has an evil route, local or Meyux?!? Answer will be in another post (I need to find the photos of that trek yet.).

But among the local residents in Badian, the most popular and the shortest route to Osmena Peak for them is the one in Brgy. Basak. It’s probably true because you will see a lot of farmers from Osmena Peak who would hang out at the Basak Elementary School, where they would wait for a transportation to bring them to the Badian’s main market. You would not see those farmers in Kawasan. Duh! =)

So finally, we had a chance of trying the Brgy. Basak-Osmena Peak route but we could not find a guide because it was Badian’s fiesta. Anyhow, we have GPS. In most of our “trail pursuits,” we never had a local guide. We use the GPS on garmin devices, and thankfully, it never had failed us.

And as we thought, it’s a popular route for the local residents, it would be a no-brainer. Hey, I have local blood. =) So we started our trek at 1PM. Based on our downloaded GPS, Basak to Osmena Peak was only 4KM. We could probably get back at 6PM. (It’s definitely shorter than Kawasan route, even if we would start the measurement at the start of the “very single tracks.”) But after 1KM from the entry point, we got stuck roaming around trying to trace the exact points of GPS but we always ended up in a “kalibunan” (bushes?), which just did not look any resemblance of being a pathway, even for animals. We got rained, climbed wrong hills, and thought of just going home.

Finally after 1hour and 30minutes, our paths crossed with a local who was on his way of fetching his goats. GOATS are definitely life-saver, and most of all this kind human Joecelle (I made up his name’s spelling.). It’s also corn season so the pathways are not easily visible because the corn plants kind of covered them. So unless you’re a local, it’s hard to point out the pathways. After Joecelle accompanied as far enough for us to get a gist of the trail, we parted ways. He was going to his goats, while we’d try our luck with FINDING Osmena Peak.

We ditched the GPS device, and just trusted our instinct and our very rare encounters with locals along the way. Based on the information from the “ground,” we’d be going through 3 barangays: Basak, Malagaring, then Patong. Our goal is Patong because that’s where Osmena Peak is. (Note: Locals can understand you faster when you use Brgy. Patong first in asking for directions. Then, just explain after your intention of going to Osmena Peak.)

Somehow, it went smoothly after that. 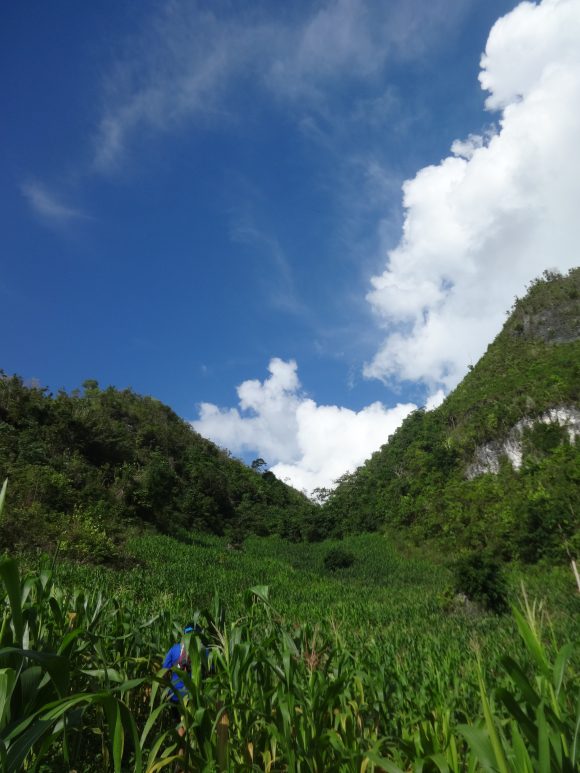 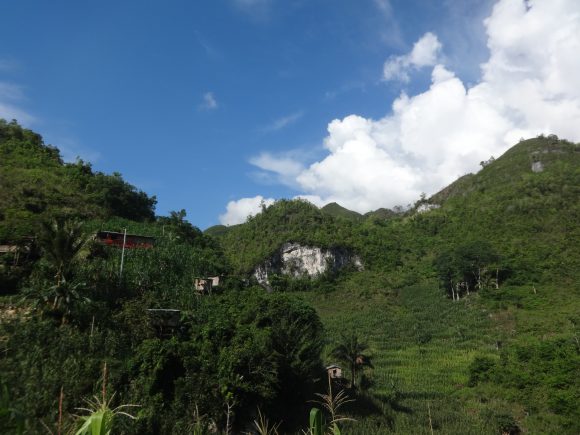 At exactly 4pm, we reached this point. From corn farms, the pathway turned into some sort of a pocket forest. And, I did not dare cross it any more because it felt like once we’d go through it, there’s no turning back; we’d definitely be back when it’s dark already. So we stopped at Brgy. Malagaring. We did not even manage to get to Brgy. Patong. I already wanted to start trekking back home as I want to pass the steep uphill / downhill before it would get dark. Steep downhills are really my horror. It was an unfinished business. But just being in the trails never disappoints.