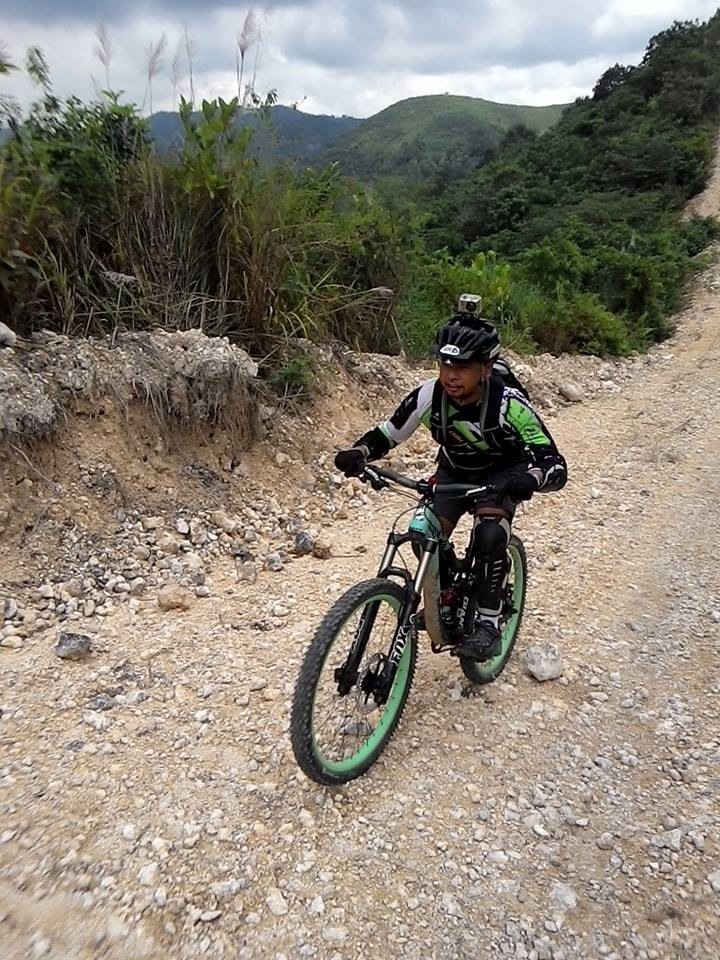 Henry David Nava Dimaano. A biker and a bike-commuter since high school when he got his first BMX — and from then on he never owned a car — to now that he’s a doctor and assistant dean in one the medical universities in Cebu. If there’s a poster boy for the green movement, then he’s the man.

Before he’ll race in the upcoming Enduro Pilipinas – 4th Leg of the National Series (register here >>), let’s get to know a bit more about this biker and Orthopedic Spine & Join Surgeon in the following Q&A.

But first, let him take a side-selfie. And, you can check his awesome bike adventure videos in youtube >>, and vimeo >>. Name of your team and brief history:

Cebu Trailblazers — an informal group of mountain trail bikers formed around the 1st quarter of 2012. We are made up of riders who mostly do regular weekend rides in the areas of Talamban, Consolacion & Liloan.

You can check the group’s has a Facebook group named “CEBU TRAILBLAZERS” (https://www.facebook.com/groups/cebutrailblazers/), and has about 300+ members to date. We’re a mix of XC riders, AM riders, a small but dedicated group of DH riders, and a few triathlon enthusiasts.

How long have you been biking? How did you get into biking?

I’ve been biking since 1986, when I was still high school student. I started with a BMX bike, which I rode in Cainta & nearby territories (QC, Pasig, Marikina, other places in Rizal). From simple riding & exploration, I expanded to flatland tricks.

By the time I got into college, the BMX became more of a means to commute (I’ve never had a car, and biking has been my means of rapid transportation since college years) as I biked from my hometown in Cainta to UP Diliman. I continued using the BMX all the way to medical school (1994 to 1999) — biking from Mandaluyong (my auntie’s house, where I lived/dormed for my medical years) to PGH until July of 1998.

The BMX was stolen from the ER parking lot, and I was without wheels for about the next 4 months. My parents decided to give my graduation gift early by giving me money to buy my first ever mountain bike — CroMoly frame & fork, no suspension, thin tires, cantilever brakes, Shimano Acera groupset — which I bought in Cartimar for less than P7,000. My then new mountain bike became my companion from 1998 to 2006.

When I transferred to Cebu in April of 2008, I found that not having suspension was a disadvantage; some of the roads I had to bike in Cebu were not that well-maintained. So I decided to assemble a new MTB, an XC hardtail, which I used mainly for transportation in Cebu City. I only began exploring the mountains of Cebu (using my XC bike) around late 2009. By 2010, I was a regular participant in XC long rides here in Cebu; but it wasn’t until I started to join the trail biking groups in mid-2010 that I discovered technical riding.

Eventually, I transitioned to a full-suspension XC rig (a 2011 model Trek Fuel EX 6 with 120mm of travel) which I upgraded to perform as an AM-type bike for the more technical rides.

I joined my very first enduro race with this bike (Enduro Ta Bai, last August 2013, organized by Enduro Pilipinas here in Cebu). So in the 13 months that have passed since Enduro Ta Bai, I’ve shifted from XC to trail riding & technical riding. I still commute with a mountain bike (the Trek Fuel), but I ride technical on weekends (using the Giant Reign SX). As mentioned above, I’ve been into racing since August 2013’s Cebu Enduro Pilipinas leg. I joined an Enduro-LITE event in November 2013 in Laguna. Then I joined the Biliran event in March 2014. I was supposed to join the Calubian enduro event, but had to cancel last minute because I had to do a major spine surgery in Dumaguete’s Silliman University Medical Center.

I have my weekend rides, and my daily commute too — it’s added exercise even though it’s not really technically demanding to just bike 13 kms from home to hospital / medical school.

Where are your playgrounds? The most challenging trail in your place can recommend? Your favorite?

Here in Cebu, the more challenging trails are the ones in Sibugay & Cantipla, followed by the Pangamihan trails (which pass by the abandoned copper mine that now looks like a lake).

The off-road trails of Consolacion & Liloan (especially the XTerra tracks) are also popular for riders who want to experience technical challenges without going full-bore DH.

But for the DH crowd, the usual favorite is the DH track in San Carlos Heights, in Pardo. I’ve tried joining a DH fun race there back in 2011, using my Trek Fuel. Haven’t gone back up there on a bike since, but I think now I’ll be able to enjoy the tracks better, given more skills & a more adequately equipped AM bike.

And yes, I do most of the servicing myself. I know how to lace spokes on a wheel; I know how to re-bleed my brakes (Shimanos anyway). I can true my wheels (although not as fast as the tech guys in our bikeshops). I can service coil-sprung shocks (but I leave the air shock servicing to our local Dan’s Bikeshop). The build is half the pleasure of owning the bike — the other half being the riding part.

If there’d be an apocalypse, and you can only save one bike, which among your bikes will you save?

The Giant Reign of course — it’s the most robust of all my bikes. (Giant reign, see featured photo.)

The Trek Fuel rides so nice on urban terrain, but it has its limits when used on technically demanding terrain. My older XC hardtail MTB and my no-suspension MTB are both in Manila — I also still commute by bicycle whenever I’m there, since the traffic situation there is just horrible! But obviously, I probably can’t save those two at all, since I’m mostly here in Cebu; and those two wouldn’t be much for handling on rough terrain.