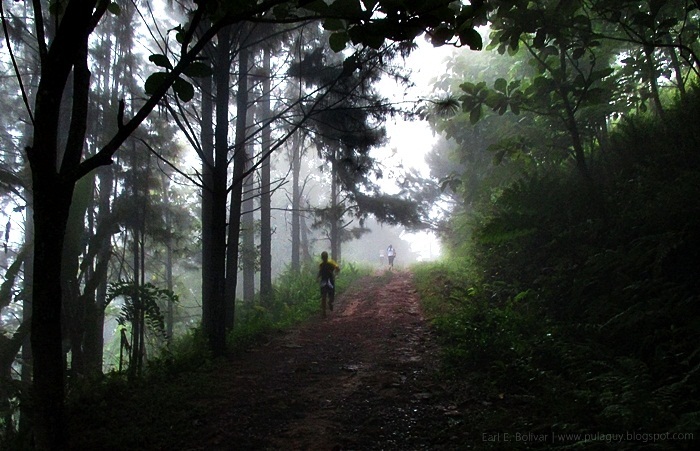 Musuan Peak is a popular tourist attraction in Bukidnon. Listed as one of the Philippines’ active volcanoes, it has an elevation of 646 meters above sea level and is already part of the Municipality of Maramag . Its accessibility from the national highway and its proximity to Valencia City and Central Mindanao University make it a favorite day hike destination. I got the chance to run to the top of Musuan Peak when I joined the LIONS 2014 Eco Run held in Valencia City last July 13. It was an 18K foot race which started and finished at the City Oval and with the Musuan Peak’s summit as its turning point. Other event distances were 10K, 5K and 3K. It was a well attended race with runners coming not only from Valencia and nearby Malaybalay but also from Cagayan de Oro, Iligan City and Cabadbaran, Agusan del Norte. 18K gun start fired off at 4:30 AM and it was still dark when we started pounding the main highway of Valencia. Good thing the street was well lighted and there were only a few vehicles passing by during that time.

The route started out flat then gradually started to ascend upon reaching Barangay Lumbo. This uphill gave runners a prelude to the tougher challenge that lay ahead. Temporary relief came upon reaching Lumbo Elementary School where the road winds down passing along Edlimar and Valencia Estates subdivisions and crossing over a short bridge which serves as the boundary of Valencia City and the Municipality of Maramag. A short uphill came next after the 10K turning point and then finally, the gated entrance at the foot of Musuan Peak where the trail part of the route commenced. The assault started a few meters after the gate. As it was still dark when I reached this part, I have to run cautiously along the fairly wide trail which was made slippery by the heavy rain that poured the night before. Thick fog wrapped around Musuan Peak in this particular morning so instead of seeing these views: I did not complain about the lack of view though. Running amidst the thick fog made it a surreal experience and I am sure those who are not from Bukidnon enjoyed it. In fact many runners paused and have their photos taken with the fog as their background. After more than 2 kilometers of uphill from the Musuan Peak’s base, I finally reached the turning point stationed at the base of the communication tower built at the summit. Gatorade, water and coffee were served by the friendly marshals. Thick fog all over the 18K turning point

I started my descent shortly after rehydrating. What I expected to be a quick and easy downhill turned out to be as hard as going up. I have to control my pace and be extra careful with my steps along the slippery path. A rescue team was on standby along the route and fortunately no untoward incident happened to all runners throughout the race. The route got easier upon reaching the national highway as it was mostly downhill and flat in going back to the finish. However, we also have to be cautious of the passing vehicles as traffic was already getting busier. I safely finished the challenging route along with 80 other 18K runners. I have to commend the organizers for making it a well-supported race. There were plenty of hydration stations even along the Musuan Peak trail, rescue team, ambulance and policemen were on standby and photographers were also there to capture moments. I do hope that this run will be held again next year as it will further promote the Province of Bukidnon as an exciting trail running destination in Northern Mindanao.

2 Responses to Bukidnon: Running In the Foggy Trail of Musuan Peak