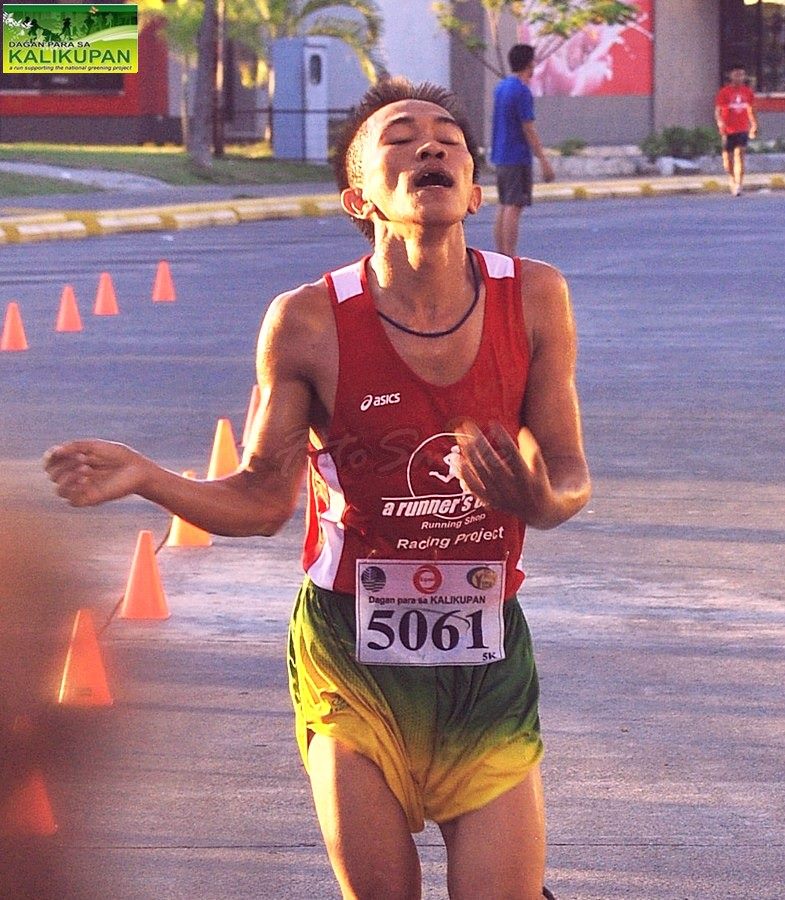 Summer had ended with mixed emotions for Cebuano runners and cyclists as Tabal and Duenas topped the Run United Leg 2, top mountainbiker Nino Surban made it to the top 10 in a UCI-sanctioned event in Japan while junior triathlete Justin Chiongbian had a heart-breaking loss in the Youth Olympic Games Qualifier in Kazakhstan.

A bunch of Cebuano runners and cyclists though were able to begin the month of June with some happy thoughts as they were able to contribute something for the preservation of the environment aside from keeping themselves fit.

The country’s reigning marathon queen, Mary Joy Tabal has moved on right away from a not-so-nice experience in the 2014 PSC-POC Philippine National Games by winning the second leg of the Run United while her long-time running coach John Philip Duenas landed second in the men’s division of the premiere race in Manila.

The 1-2 finish of Tabal and Duenas in the Run United was just a bonus actually as their main reason for going to Manila over the weekend was to meet up their new sponsor, Asics.

Tabal had no high expectations last Sunday, all the more when she started to suffer LBM at the early goings of the race.

Tabal though tried to keep on going and managed to take the lead despite stomach ache.

Tabal though started to get really uncomfortable when she saw Cristabel Martes already running side-by-side with her as they got caught with a bunch of other runners from the other class who were still on their way to the turning point as they headed to the finish line.

Good thing, Tabal still had some energy left and managed to pull away in the final 100-meters for the win.She finished in two hours, 11 minutes and 28 seconds as against Martes’2:11:58. Duenas, for his part, got bored of waiting for Tabal going into the finish line that he decided to speed up and eventually caught up one Kenyan and secured the second place honors via sprint finish.

It was another Kenyan Eliud Kering who bagged first place with 1:59:37 followed by Duenas with 2:03:38 and another Kenyan Philip Ronoh who came out third with 2:04;35 clocking. To be on the top 15 list in two events already meant something since Japanese riders highly-skilled pedal-pushers, how much more when one is alone in the battlefield like Surban.

With what he had achieved, Surban is expected to be in his best form when he represents the country in the Asean Mountainbike Cup in Danao City on June 13 to 15.

In triathlon, a twist of fate ended Justin Chiongbian’s goal of securing a slot in the Youth Olympic Games in Nanjing,China.

The last YOG Qualifier in Kazakhstan allocated a total of five slots(at one each per country). Chiongbian was looking good, coming out fifth at the end of the bike part, only to stumble halfway of the first of the two-loop run course and resulted to a nasty injury.

The Portugal-trained Chiongbian was injured his legs and wrists and even needed assistance and failed to finish the race.

The Philippines though has lone female bet Vicky Deldio of Olongapo to the YOG.

Deldio benefitted from the ITU’s ruling regarding slots each team that allowed her to claim the fifth slot even as she at ninth place overall.five winning circle.

In Cebu, three other Kenyans Isaac Simat, Douglas Mwiti and Abraham Missos had a 1-2-3 finish in the men’s 10-km division of the Dagan sa Kalipunan at Parkmall in Mandaue City.

In the distaff side, it was Lovely Andrin who got the top spot with a time of 45:13 followed by Monaliza Ambasa with 45:42 as Meeries Ramirez landed third with 46:48 clocking. Robert Daang dominated the 5-km division and Cherry Andrin on the girls’ side.

John Cliff Debulosan, for his part, got the 3-km boys’ title while little-known Saralie Quezon won the girls’ class. Aside from his victory in Mandaue, Isaac Simat also won the Fitness Festival’s 10-km run at MEPZ II in Basak, Lapu-lapu City.

It was again Douglas Mwiti that was trailing Simat at the finish line of the 10-km run while the other Kenyan Abraham Missosclaimed the 5-km run.

The Cosgraves–Anthony, Francis and Tony Francis occupied the 1-2-3 spots of the 3-km division.

The distaff side’s top performers per individual class were sisters Cherry Andrin in the 10-km division and Lovely Fe in the 5-km while Michelle Beboso reigned in the 3-km division.

A duo and group competition also spiced up the event with the tandem of Elijah Alunan and Aquilis Jude Alunan winning the 3-kkm duo and the Academia family in the 3-km group event while Ian Refuella and Fritz Anor won the 10-km duo in this Sports and Fitness Enthusiasts-technically handled event.

The following day, it was Elmer Navarro’s time to shine in this Sugbo Bikers-organized event.

Navarro won the premiere class of the road racer action. Cheche Barcenal, for his part, outsmarted Arjay Beato for the top spot of class B while another Mier, Michael grabbed part of the limelight by placing third.

Some of Cebu’s triathletes also joined the action with Ralph Eduard So winning the mixed 14-under title followed by Jezreel Tan and Neil Manabat as female entry Aaliyah Mataragnon coming out fourth.

CONGRATS, everyone! See you next week! =)