Event: Kawasan Falls Marathon 2014 (Share your experience soon at aktib.ph, and have a chance to receive a visor!)
For race kit pick-up and route map info, click here >>

KFM was cancelled last year. And, it’s great to see it come back again! For those who will be joining it for the first time, thank you for visiting my hometown! I’m sharing my 2012 experience, which was a bit painful! =)

***
(This is a repost from my old blog.)
Every thing went well even before the race day. I had a good sleep. I woke up early enough to have time for a full meal, and emptying of the tummy.

Then came race day, the first 10km also went well. I was the very last in the pack of full marathoners which means I was in the good pace — my pace. =)

Since I was very slow, the 21k-ers overtook me in which a lot of celebrities were running. First, Donna Cruz overtook me. I was so starstrucked that I forgot to get my celphone and take a pic of her. She is so pretty and sexy which made me think that Barbie dolls were molded after her.

Then, there was the groupies who looked like they were just having some “walk-in-the-park” running moment when, after some time, I realized it was Pia Cayetano who was at the center of the group. Sen. Pia was busy raising her celphone taking pics of herself with the scenery. I was starstrucked again that all I was able to manage to say was “Hi, Sen. Pia.” And, then I got a smile from her too.

Then, I said to myself that I could not let this one pass; it’s rare that I got to run with a senator. So I took my celphone this time so I have pics to show as proof. But then she was so fast that all my pics of her are blurry.

(I swear I really was able to run with Pia Cayetano for a few seconds. She is somewhere in the middle of this picture.) 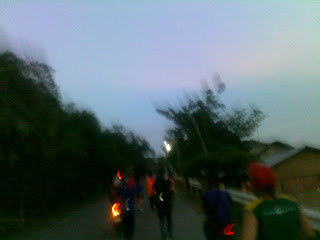 After Pia Cayetano, I was then busy looking for my friend Leah. I just could not miss this moment, not because she’s trying to beat Donna Cruz by joining the “Run with Donna” category. But it was her “coming out” event. I was very excited for her! For a moment, I felt the world is unfair. Why are some girls have it all — the looks, the brains, the fame and fortune, and they even have the speed!!!

Alone but happy. After passing the 21KM turnaround, I found myself alone again which is just perfect. I’m probably one of the few who loves to be left alone when running.

I put on my earphones, and play my favorite running tracks from the The Postal Service.

I was running with a view of the mountain on one side, and the sea on the other. It was perfect bliss. I could not help but be endlessly grateful to God for these little things.

My pace was upping but I still feel relaxed, which meant I could even beat the cut-off time for a few minutes.

I was finally “in the zone.” I was ready to play catch up with the rest who were all ahead of me.

I was enjoying the scene, the music, and my alone-ness when out of the blue, my right knee scream in pain when it landed on the ground.  I could still remember I was looking at the very calm sea when a pain jolted from the side of my right knee!

PANIC! Panic! Panic! I was just a little over 10KM. This could not be. It would be alright if it had happened in the last 10km or after the 42KM turnaround because I’d be fine dragging myself in pain halfway to the finish line. But 30KM of pain???

FRUSTRATED! I should have listen to my gut feeling to not dash the downhills somewhere in the 4KM of the route. I had this pain on the side of my right knees which would resurface when I attacked downhills. I got this from the last Coast to Coast run. I’m not sure if this is injury but I guess it’s more of an overused case; my right knee probably gave in after having to support my “overweight” for a very long stretch of killer downhills of the Coast to Coast. I was frustrated because I should have taken a more proactive recovery than just refraining from running. Or maybe, I should have not run at all. =(

DNF or Suck it up!

I felt like crying. My motto for long runs has always been, “I’m stronger than you, pain.”  But at that moment, I was just not in the mood to play that “strong” part. It was supposed to be my birthday run. I want to run it like I was a having a party, not like I was in a dead person’s burial.

If the pain made its presence at the turnaround of the 21KM, I would have gladly DNF-ed and just run unofficially the half-marathon instead. But I was already somewhere in the 12KM.

I wanted badly to just DNF because I could not stomach having to bear the pain for 30KM more. But it would already be my 3rd successive DNFs. I DNF-ed in my last 2 races, Coast to Coast andColumbia Trail Run. It would be my 4th for this year including the Mt. Kitanglad race. If I would DNF this, I would be officially a DNF-spoiled brat.

But nooo! I wouldn’t let any thing stop me from finishing my birthday run! And, no, I don’t want to be a DNF-spoiled brat! So I had to suck it up!

One of the “talent / skills” I learned over time in running is mental toughness aka 101 ways of fooling one self. From then on, my mind was busy pulling tricks and doing some mental calculation of how long a trick can work. So to make the 30KM of pain and torture bearable:

At the first half,

* I had to let go of my plans of beating the cut-off time. As if I’m not used to be always finishing beyond cut-off time.

* Everytime I could no longer bear the pain, I would bully myself that there are lots of liniments and chairs waiting for me at the turnaround. I could sit down and burn my knees with liniment, and drink ice-cold pocari sweat / gatorade.

Repeat all of the above until turn-around marker.

After the turn-around, my “mental toughness” needed some extra support. I could no longer bully myself that reaching finish line would be easy. And so my chemical romance started. I’m not really fond of energy boosters but I was desperate at that moment that I resort to all sorts of chemicals — from external to internal application.

The first chemical I asked help from was Omega from a friendly sari-sari store after the turning point. The Omega was good enough to bully me for 5KM. 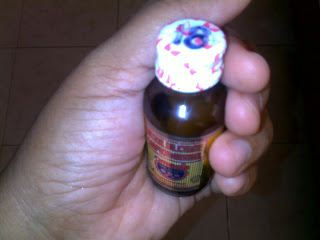 The energy gel did give me a 2nd/nth wind. I felt I could fly but I just could not get myself into a faster pace as landing on my right side was really painful. It was frustrating like looking at myself having a slow painful death.
I was entertaining again the thought of quitting — maybe upon reaching the 31KM for my 31st birthday. But my mind said that maybe I could treat myself with a Lipovitan or Red Bull at the 30KM. I was really thinking of Monster energy drink but I knew there’s no way I could get hold of it in those areas. So on my way to 30KM, I bought a Red Bull from a pharmacy.

I swear those energy drinks work. I used to drink Monster before on races but I stopped because the effects are too good to be true. They do not only give me a boost, but they also have some sort of pain reliever. I actually bought the Red Bull for the pain reliever more than the energy boost. I was feeling good. But my “feeling good” was useless when I could barely move myself with a decent pace because of my knee pains.

After a few minutes of downing the Red Bull, the boost and pain reliever kicked in, which got me thru until the last 4KM to the finish line. At the last 4KM, I bonked. FYI: One thing to look after when drinking energy drinks is that the high can be very high, but when the lows kicked in, it can be very low. (That’s why I don’t really recommend it.)

Good samaritan saving me from debt

After the “Heartache hill” (I think this was named after Heartbreak Hill of Boston Marathon), I bonked. I could feel my sugar was very low as I was already disoriented. I badly needed some sugar and carbo injected to my blood. I no longer had money as I already spent them all on the different drugs I took along the way. I was thinking that I would just negotiate with store owners that I would just pay them later after I reached the finish line. Maybe gave them my timer just so that they would believe me that I would really come back.

But thankfully, I saw two cars which I thought were aid stations. But then upon closer look, they were support cars of the TCRC (Talisay City Runners Club). I approached them, and they fed me with bread, gatorade, and water. And, one guy bought a Coke sakto for me! I guessed he really knew I badly needed a sugar boost. It was just so sweet of them. THANK YOU!

So after this very long story, I did finish — way beyond cut-off time. But not before meeting 2 temptations to quit:

* A guy with a motorbike took a pity or was just plainly bullying me offered to give me a ride. He even told me that he would make sure that no one would see me “cheating.” I told him, he should have made his offer when I was still in KM20, and maybe I would take his offer. And, I hold myself from telling him he’s STUPID.

* My great husband called me and said that he finished, and then asked me if I would DNF. I really have a thoughtful husband!

Looking back at it, I never felt I finished a marathon. Only the first 10km felt like I was doing a marathon. But the rest of it felt like I was in an internal battle — ME versus PAIN. I was not racing, but instead all I did was trying to outdo / outrun the pain.

Yes, it looked like I outran pain. But I don’t like to see it that I beat the pain. But it’s more of getting to know more a friend, named pain.

As the saying goes:

“Make friends with pain, and you will never be alone.”

It was definitely one heck of a birthday run! I don’t @$%$^%$ understand why I gave myself such a gift. 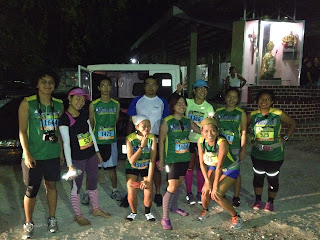 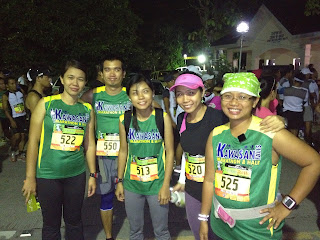 For a few final details of Kawasan FAlls Marathon 2014, click here >>. And, looking forward to your race experience!