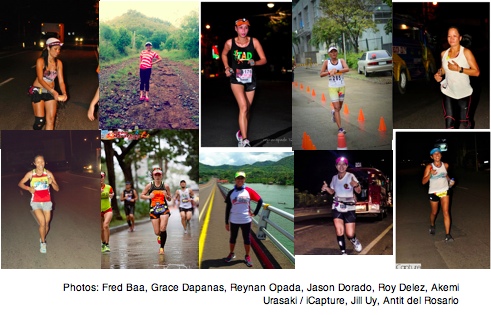 By owrange on 7 March, 2014 in All-Women Ultramarathon (AWUM), Race Feature 2

“Race director Willie Estepa foresees a much earlier finish this year, say, sub-5. It’s going to be a long wait for the top three finishers for the awarding at 7:30 a.m. His advice to the ladies: Enjoy the route. Walk the uphill. Run the downhill. Jog or run the flat.” via So: The outfit matters | Sun.Star.

Is Doc Willie’s sub-5 forecast too much for the ladies? But as they say that setting a low expectation is an insult to the true power of the ladies. Knowing that a lot of the Top 10 of the AWUM 2013 were making sub-4 hours last Cebu City Marathon 2014, the sub-5 is just waiting to happen. For this year, it’s not only going to be about who is going to be the champion, but who can make Doc Willie’s dream come true?

Jade Abellana (IGAT). As much as Jade will like to take it easy as she stated in Sun-Star interview here >>, but the fans and audience can not definitely take it easy on her. Being the AWUM Queen 2013, the expectation is definitely high on her. She will be the prey the girls will be clawing their nails on.  Of course knowing Jade, this girl will roar back. She already holds a sub-5 50K record in I Shall Return Ultramrathon 2013, see here >>. And, she made that record even if she was lost for a few kilometers. She definitely has the muscle memory to do it.

Or, will she do a Chrissie-Wellington act of resigning from the competitive scene after having a great lovelife? Nevertheless, she may hand over the crown to another woman but she will always be that girl in “sports bra” attire with a tiger look. Sandra Soliano (NRRC).  She may landed in top 3 of a few 50KM races, but she cannot be yet considered “solid” in the ultramarathon scene. But with her recent record of 2 consecutive sub-4 marathons, as 2nd placer in Red Cross Humanity Marathon and 4th placer in the Cebu City Marathon local category, she cannot be missed in the list.

Read on our previous story of her here >>, “Sandra Soliano’s Unfinished Race.” Virginia E. Parajenog (TAD). This woman is definitely missed in AWUM last year. And, the fans are definitely expecting something big from her comeback in AWUM this year, and, so is the big chance that the crown will be hers, considering the strings of ultramarathon championship titles under her with the latest was the CUC 100K Leg 3. Preciosa Sanchez (NRRC). Being the 2nd placer overall last year, expectation is also high on her. But personally, I want to take it easy on her after her injury from the Olongo Island Ultramarathon, which became a “major injury” then on the CUC 100K Leg 3. She might be still on recovery phase until now. Surely, we don’t want her recovery to take a setback by giving it all out in AWUM.  But the thing is that she was brave enough to run with an injury in a 100KM race, what’s a 50KM right? =) Mereeis Ramirez (Dumaguete City). It cannot be denied that this woman is probably now putting the other girls on the edge. When I talked to her she said she cannot yet say that she will race AWUM competitively. But there’s that glitter in her eyes when asked if she can do AWUM in sub-5.

Will she be the girl that will make Doc Willie’s dream come true or will she just have a beauty rest on Cebu’s International Women’s Day celebration? Read on our recent story, AWUM 2014: If others can do, why can’t I?, of Mereeis here >>. Mary Luz Hermosa (IGAT). Because she’s a champion waiting to happen. She always has that “x-factor” that is hard to pinpoint, and that’s probably the danger there because she is hard to guess. Melchomelda Kitane (TOES). We’ll never know what storm this Yolanda-toughened up woman will bring to AWUM. Will she be showing that Warays are now back on their feet ready to battle?

Read on a story, Tacloban TOES Goes To AWUM, here >>, where she is mentioned. Grace Dapanas (Valencia City). Because Bukidnon is well-known for their national-level athletes… This girl is a new-comer to the long-distance races but she’s backed by the 7 tribes of her province and a high-altitude training ground, she definitely has something in her lungs and legs. Maripol Tecson (DARS). She came in 10th placer in AWUM 2013. You can red more about this mother and businesswoman in this interview here >>. June Marq Ocana (PH Adiks). She’s constantly top 10 placer in the previous AWUM. Though, it’s hard to bet on her this year because she seems to on a lie-low. But it’s also hard to drop her from the list. There are a lot of names I have not mentioned, and a lot I missed. So feel free to share with us your top 10!

But the more exciting thrilling to know is who will get the “Stunning Awardee.” I will not go into that because it can go on forver. It can be more challenging for everyone as the lead pack are already stunning too. Some girls just have it all: speed and beauty!

And, the “Stunning Award” is the part that the organizers should be more ready as the girls may care more over this than the sub-5 goal. They will fight with their tooth and newly polished red nails for this title. Because you do not simply mess with a color-coordinated-costume gang: Cheers to all AWUM 2014 ladies! Let’s give them a good show!

To the lead pack, we’ll be at your back of breaking that perfect sub-5! =)