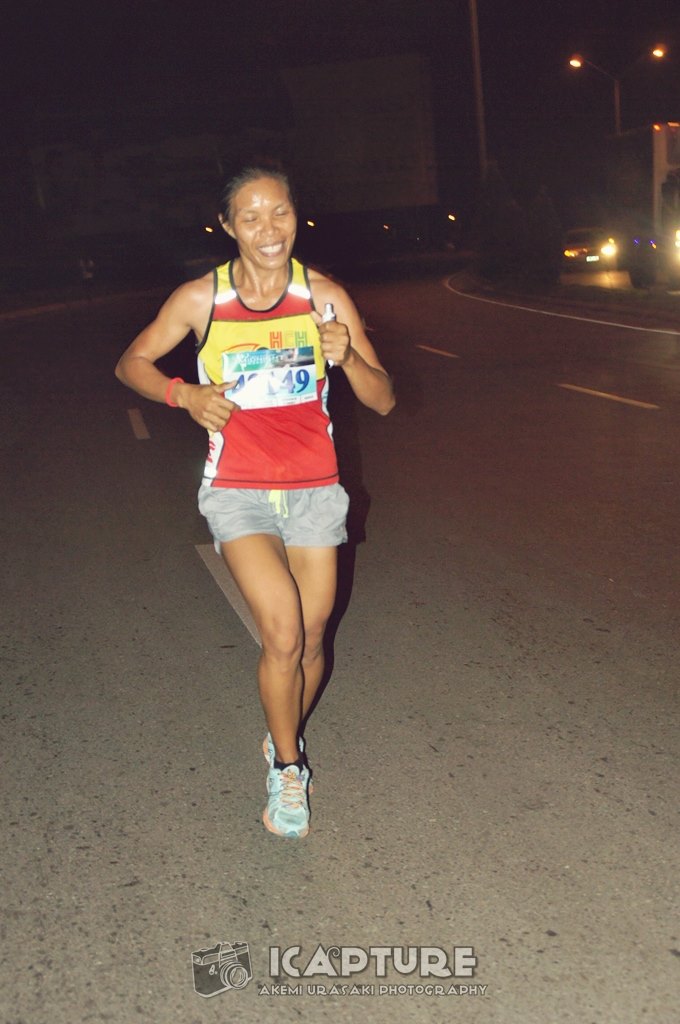 Some may be surprised as to why she will be joining the 3rd All-Women Ultramarathon 2014. For competitive runners like her, it may be a waste of time to join a race without the prize money.

But as a race to celebrate women, the International Women’s Day, I believe no one will disagree that she is more than enough to represent the women’s strength, and also weaknesses.

It was the exact words, the reasoning she had to give to her eldest 12-year old son to get his permission to join her very first ultramarathon. Though her kids are used to be left behind during weekends while she travels to other places to race for their weekly budget, but this time, it deeply worried her kids knowing that their mother would be in a 100KM race, the Negros Oriental 100. Her eldest son begged to escort her on a bike but she could not allow it too for his safety.

After reassuring him again and again, she was finally permitted. She won the race in 12 hours. For a first timer without the adequate training, she was definitely a talented runner. She said that she probably can do better only if she had an escort.

Third year high school when she was picked by their PE teacher to be a middle distance runner. Though, she was able to compete in the national level, Palarong Pambansa, she considered it as a fluke since she did not really put much thought on her running that time. She said that she only trained when their coach would be watching. If not, she would not bother.

When high school ended, and so her running.

It was motherhood that got her back to running. She wanted to set a good example, something her children can look up to. So by the time her eldest son turned 8, she started “jogging” at their city’s oval track.

It was during in one of her routine jogs at the oval track when a student told her to try joining the upcomimg Milo Eliminations in their city.

While she introduced running to her children, she was also then introduced to the world of fun runs, and competitive running.

The 32nd Milo Eliminations was her first competitive race since her middle distance days back in high school. And, she landed 3rd in the regional eliminations which made her a qualifier with an all-expense-paid trip to the national finals in Manila.

She said that she did not really make any outstanding performance in her first Milo Marathon national finals. But she was still able to rank 25th, and was just happy to travel to Manila.

She was only 28 years old when her husband passed away. Along with it later, her small eatery business was taken away by the owner of the place.

And, the biggest blow for her was when she got betrayed by the man she thought who would be her partner in life. But instead he abandoned her when she got pregnant, without giving any financial or whatsoever support.

Being left pregnant plus 2 kids to raise alone on her own, saying that it was the lowest point in her life can be understatement.

She said that she used to ask her eldest son to bring the baby to the father to ask for allowance. Until she had enough of it when she could no longer bear seeing her kids being dealt that way.

It was very hard but she had to get back to running and racing even when her baby was just 4 months. The hardest part was weaning his baby from being breastfed as she was advised that it was not good to breastfeed her baby as he might absorb the mother’s tiredness.

Asked what is her secret in her fast running, she said that she could not really pinpoint as to where she gets her being a fast runner.

She has no coach.  Her one and only training program was given to her by a Kenyan runner who was interested on her but she said that she already had enough of men that she did not entertain him. Instead, she asked him to give her tricks on running. (See her training program below.)

She said that compared to others, her training program is very lax in which her longest run is only 1:30 minutes. It might not be the best program out there. But it’s the best program that works for her as a full-time runner and a full-time mother. The reason why she cannot do more hard and longer training because she only trains when her kids are still asleep, and sometimes her training can be inconsistent when her candle business is in demand, and not because she’s being too lenient.

She’s also a “minimalist” (not shoes) runner. She does not time her trainings, nor her races.  To her, she only checks her time at the finish line’s timer. She does not make negative splits, nor devise any specific race strategies.

Other than that, she just runs based on her feelings. If a runner is close to her, then she would run faster. If a runner overtakes her, then the best she would do is not to chase but to hold on to her position as she does not want to exhaust her body to preserve it.

After many times of failing to trace where does her talent in running came, she just agreed that maybe she’s naturally a gifted runner. Like she is naturally gifted without boobs, thus one less thing to worry during races. And, we laughed.

But the way she balances her life: raising 3 boys on her own, training, racing, coping up with setbacks, and having a candle business on her side takes more than a talented runner. It takes a complete package of a smart strong talented woman MEREEIS RAMIREZ.

To say that she’s a talented runner is an understatement, or maybe she’s not at all talented. But definitely, she is an inspiring woman.

And, we had to cut short our conversation because a woman who was kind enough to offer her a place to stay for the night was picking her up already. (We met on a night before her weekend race.)

This Saturday, she will race her second ultramarathon. But rest assured to her children that there will be people on the side who will watch after their mother for them this time.

She might give the lead pack a challenge, or she will, in a rare moment, enjoy a race like a girly woman because, in her words…