The Red Cross organization stands for being of service to the entire humanity, to all types of individuals, regardless of his / her affiliation. Thus, they remain to be an independent and neutral organization so that any one can seek help from them, and they also can freely assist any one.

Being in the front line of emergency crisis, calamities and even war, Philippine Red Cross may have the toughest job, but supporting them can be no-sweat.

Here are simple ways you can give support: Blood, Time, Money, and Run… Any help from us will not only be a help to the Red Cross, but to the entire humanity. 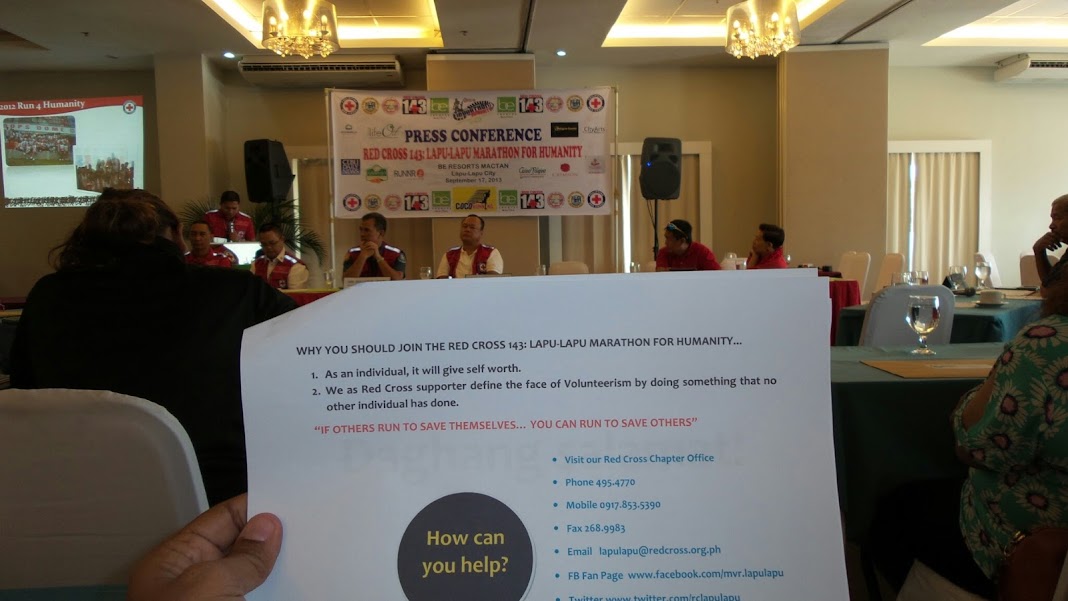 Red Cross Cordova – Lapu-lapu is relatively a new chapter office of Cebu province, which is headed by Vic Jay Gonzal, who started being a Red Cross volunteer way back in his high school days in Ormoc. After college, he became a full-time in Red Cross, stationed in Manila. When a Lapu-Lapu & Cordova chapter was opened in Cebu, he was then sent here to become the chapter head.

Being a new organization in Lapu-lapu & Cordova, Vic Jay Gonzal was looking for a way to get their organization closer to the community, and vice versa. Thus, the thought of organizing a fun run came up. But he was hesitant at first because he had not an experience organizing.

But someone came out to volunteer, Joel Juarez of Coco Running (a race organizer / planner in Cebu), in helping them organize their fun run. They started with 5K in 2011, which has an overwhelming response. The different local offices supported them, and runners flock to it. So the following year, PRC Lapu-lapu & Cordova Chapter then had a half-marathon, and now 42K marathon this year.

It’s amazing to think how a full marathon (42KM) was born from the help and support of different parties: from Red Cross, local government and private businesses, Lapu-lapu & Cordova community, and runners. (You can check the different personalities here >>.)

Giving blood will not only help the organization, and people in need, but it is also beneficial to the donor as:

“Findings have shown that donating blood reduces the risk of heart attacks and even cancer. It even burns 650 calories for every pint given.” – More at Donating blood is as good for YOUR health as it is for the receiver | Mail Online.

Donating blood does not require any thing except, of course, your good health. Simply go to any Red Cross chapter in an area. You will fill out forms; blood pressure and hemoglobin level will be check. If everything would come out good, you will then proceed to their “bleeding station.” The “bleeding” will not take more than 15 minutes. If you’re a frequent blood donor, bleeding time might be faster.

After that, you’ll be given snacks, and you’re required to stay put for 15 minutes. You will also receive a Donor’s Membership Card, which is like a loyalty card. It records your blood donation activities in Red Cross. To make it fun, you can donate at different Red Cross chapters. After 9 donations, you will be awarded as “gallon-er.”

As they say that “Time is GOLD.” Dedicating your time for the benefit of Red Cross is a wonderful gift to humanity. You can dedicate your time by:

* You can be a Red Cross Volunteer. To be one, you do not need to have a medical-related degree, or college degree as long as you have the heart to be of service to other people. In return, you will receive trainings and skills development which will be yours forever.

* You can also volunteer to organize fund raising activities, like fun run, with Red Cross as beneficiary. Or, if you plan to have an activity, you can make Red Cross be part of it. You can coordinate with them, and they will also help you out in marketing, and others.

Probably, the “easiest” way to support Red Cross. But nevertheless, it will be of great help to them.

* You can donate directly to Red Cross, through:

– http://ushare.redcross.org.ph/
– or here are more venues where you can send your donation here >>

* You can get their training services for first-aid and others for your businesses and companies.

* Get a Red Cross membership for as low as Php 50 / year, which comes with an accident insurance.

So yes helping the humanity does not need to be complicated. It can mean just putting one foot in front of the other. Again, inviting you to sign up for the upcoming Red Cross 143 Marathon for Humanity (details here >>). EARLY REGISTRATION rates is still up until Oct. 31, 2013.