(Continuation… Part 1 here >>) While, he is victorious in his goal of getting a formal education. He has another goal which he has been racing for a long time that is still quite elusive. And, he sets that this year, he will have to take that risk or else, it will be forever stalled.

“Kung naa ko’y gusto buhaton, ako jud ng huna-hunaon og kadaghan, ka million times. Kay once maka decide ko, ako jud ng buhaton.” (If I want to accomplish something, I would think of it over and over a million time. Because once I decided on it, there’s no turning back for me.)

To Be Unlocked Goal: National Athlete

The most intense races he could recall were the back-to-back neck-to-neck races he had with Mendel Lopez and Simon Losiaboi (Kenyan). To top it all, both races happened in the “hilly” parts of Cebu: “Paghandum Ni Magsaysay” in Balamban, and “Run to the Clouds” which was a race to the foot of Tops in Busay. In both races, he finished in 3rd place with just seconds from the 2nd placer Losiaboi.

Jobert, 3rd from the left
(Photo from Mendel Lopez)

In the height of the rivalry of Mendel Lopez and Simon Losiaboi in Cebu, Jobert Carolino was probably their third wheel. Jobert considered Mendel to be his strongest opponent, but who he also considered to be one of his closest running friends and mentor. He said it was Mendel (who happens to be also a national athlete) who challenged him that he was once a national athlete, therefore he had no excuse why he could not do better. It was Mendel’s reminder at the times when he was not that successful when he moved racing in the 10KM distance.

While Mendel is momentarily off from racing competitively to focus on his business, and Simon Losiaboi is no longer in Cebu, Jobert is still left in the racing scene. So what’s keeping him racing, when he finished a 2-year course already?

He did not start with running as his chosen sports. He was a badminton and table tennis player back in high school.

It was his coach who saw a potential in him to become a runner; not because he was seen running fast but because he was such a restless individual (“kiat” in his own words) during his badminton and table tennis practices. So his coach advised him to try it in the athletics.

Indeed, the coach was right. He became a dasher / sprinter to middle distance runner; his events were 100M, 200M, 400M. He was then winning their sports fest, and was sent to inter-school competition. He had what it got to be sent off to Palarong Pambansa except that he failed to meet the age requirement.

Entering college, he banked on his running to get him into a varsity scholarship program. But when he failed from getting a scholarship, he had not much choice but stopped after a semester. Though running did not save him from dropping out of school, it did not disappoint when a different opportunity was presented to him. It led him to experience playing in the national field, and becoming a national athlete.

A taekwondo coach, who knew his talent in running, contacted him and advised him to join their province’ selection of representative for the Philippine Olympic Festival (POF). He got in. And, indeed, he was not a disappointment to his province, Davao del Norte. He brought silver for 400M (56sec), gold for 800 (2.04min) at the regional event; in return, it brought him to the national level.

At the last minute on their way to the national games, his coach decided to get him into the 5,000M (5KM) category instead of his 400M and 800M events. He had never officially raced in the 5,000M category yet. It was because when his coach did a time trial, his time was disappointingly slow compared to his previous records.

And, it was not because he was lacking in training. He was actually over trained. After their scheduled trainings, wanting to push his self further, Jobert would go out for long runs on his own without his coach’s knowledge. He did not know that going out for long distance runs would cause a decline on his sprinting time. Thus to work around it, his coach decided to let him race the 5000M.

Despite that it was his first time to compete in such distance, he won the bronze medal with just a lead of one step over the other 4 runners who he was running against with, neck to neck.

But his victory was cut short when POF (Philippine Olympic Festival) officials almost disqualified him as he was officially registered to the 400m/800m events. But seeing how he run with so much heart and passion, the POF officials decided to honor him the bronze medal, which could be out of pity according to Jobert. Though, the bronze medal was awarded to him but he was not included in the official race result.

And so, he has an unfinished business. So this year, he is set to triumph it!

Thus. it was not a surprise when he dropped out from the Milo Eliminations – Cebu Leg when he saw that he was beyond the 1:15 qualifying time for the all-expense paid trip to the Milo Finals. Getting a 1:15 finish time is very important to competitive athletes like him, because aside from getting an all-expense-paid trip to the finals; it’s their way of making a statement.

In our conversation, he said he set his self that this year, he will go to Manila to train there, and pursue his national-level athlete goal. Because he knows that for him to make it, he needed a guidance of a national-level coach, not only to train him but to control him from over-racing. And, for athletes like him, getting a 1:15 time during Milo Marathon eliminations is one way of making a statement that they are serious athletes worthy of considering into the national team roster. 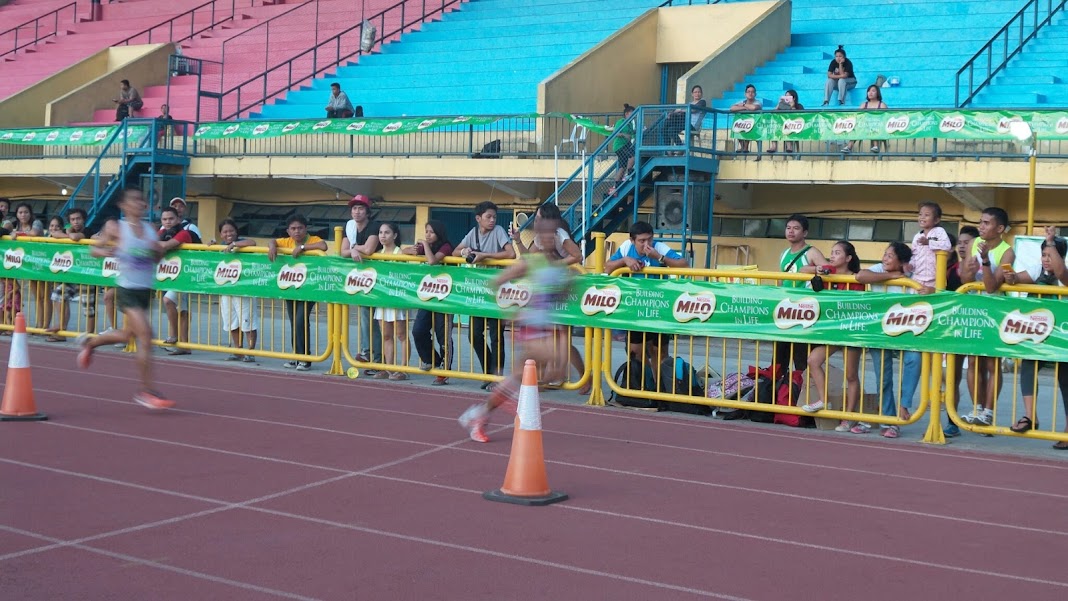 And as he said, he will not stop until he will get it. After dropping off at the Cebu Eliminations, he picked up his self, and tried it again in Butuan.

And, he got what he deserved: a championship with a 1:13 time, the 2nd fastest time among the qualifiers from the concluded provincial eliminations this year! (See Milo Eliminations results here >>)

Champions are not all about success, but of not settling for less.

Robert Daang, Jobert Carolino, and Bonifacio Monjas had shared with us few tips about their running. We will soon be sharing them here at runroo.com. Please keep posted.