For those wishing to running with a different scene, outside Metro Cebu, following are some races you can check this coming weekend (April-May): * RUN FOR A CAUSE 2013 (2K/8K/16K), MEDELLIN, CEBU – April 28, 2013, details here >>. Check below on what activities / attractions you can check in Medellin, Cebu. * HIGHLAND ENDURANCE RUN – CTU MOALBOAL * HIGHLAND ENDURANCE RUN – CTU ARGAO For more other races / running events / multi-sports events in Cebu, Philippines, see here >>. DOWN SOUTH CEBU

Carcar Kagumgum Runners group has probably busy weekends in a row. They help in organizing an upcoming run, 1st Perrelos Purok 2 Run, this coming Saturday. But NOTE that please contact them before you join the run as this is not totally open for the public. It’s meant for for the local Carcar residents. Details of 1st Perrelos Purok 2 Run here >>.

And the previous weekend (April 14, 2013), they were also supporting the “Halad ni Leon Kilat 42KM.” CUC’s President Tony Galon spearheaded in organizing the event this year. This marathon, which honors Leon Kilat, started back in 2011 by the hero’s big fan, Max Limpag. A detailed story about Leon Kilat, and how this “marathon” started at Ceburunning.com here >>. Just like the first version of the run, this event is not announced publicly but everyone is welcome to run along with them. It was more of a by-invitation event. Hopefully, this will be publicly open in the following

year?!? =) Jack Labajo of Talisay City Runners Club (TCRC) was the champion for arriving first at the finish line, which was the monument of Leon Kilat, near the Municipal Hall of Carcar.

It was a simple marathon run, but definitely, the satisfaction runners got from it is nothing but overwhelming. Following is a short video, capturing the ecstatic runners at the finish line, by Iris Ignacio of Dagan Caritas running group. And to some, Halad ni Leon Kilat 42KM fulfilled their dream to become marathoner. Read on Kagumkum Run to Carcar story by a first-time marathoner. If you have a story to add, feel free to share at aktib.ph here >>. If you happen to be in Carcar, following are few things you can do. HISTORICAL TOUR You can start with the Leon Kilat monument, located near Carcar’s Municipal Hall. Then, from there you can hop on to the nearby heritage houses. Following a heritage house which you will not miss since it’s along the highway. It’s the building you can pass by before you make a turn to Leon Kilat’s monument. For a list of more heritage sites of Carcar, Cebu, see here >>.

SHOES / FOOTWEAR CAPITAL OF CEBU Drop by at Carcar Shoe Expo, Villadolid, Carcar and have a pic taken with the world’s biggest shoes and do shoe shopping. If you’re from Cebu City, Villadolid is located before the town’s center. A lot disagreed with this fact, but since I’m a Cebuana, then I would support that Carcar holds the world record of biggest shoes in the world. Medellin is sometimes overlooked as a destination probably because of Daan Bantayan, where most people head to for the Daan Bantayan Island beaches.

Following are some activities / places you can do while you’re in Medellin: How about a bit of island hopping?! Medellin has it too. You can check Traveler’s Couch Funtastic Gibitngil Island post for a more detailed information on how to go there, and what activities you can do in this island. 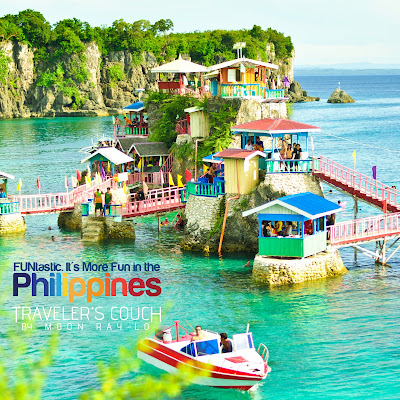 A more peaceful picture of the Gibitngil Island, Medellin, Cebu. 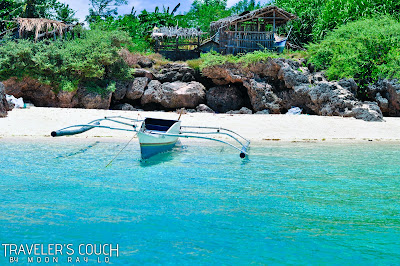 And, if you get lucky, you can experience “Blue Moon.” You can check Karla’s Blue Moon sighting at SeaHorse Resort, Medellin here >>.

Rose Buenconsejo. A runner who runs after runners, and their stories, and her dream to become a NEDBANK. Promo Girl, runroo.com View her aktib race calendar >>

View all posts by owrange →