By owrange on 6 December, 2012 in Race Experience, Race Reports 0

Or, great things can start with a picture with a borrowed finisher’s medal. a post-race celebration at Blu Gre with their durian coffee

These bestfriends asked to borrow Mark’s finisher’s medal if they can have a picture with it. They joined the Milo Marathon Davao Elimination leg in the 5K category (no medal given to this category). They’re awesome like that! Like them, I also did not get any finisher’s medal at the finish line though I joined the 21K.

Or, great things start with clumsiness… not!

I registered for the 10KM category of Milo Marathon Davao Eliminations Leg because I knew 2:30 cutoff time for 21K is so way out of my league. But an overlooked happened on my part, and I accidentally ended up with the 21KM category. I don’t fear the cutoff time nor the distance. But my “thick-faced” at that moment just have to respect Milo’s rulings.

Since it was my very first time be in Davao, I got over excited that I failed to check my race kit as I was just too busy posing with every landmark I met, 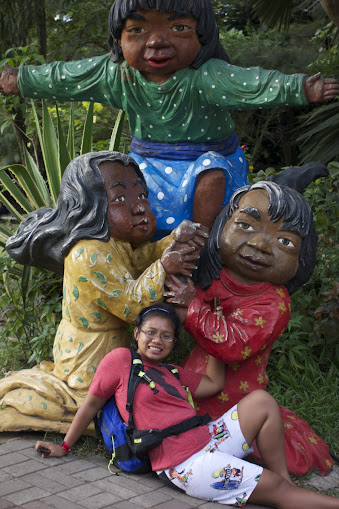 and meeting my long time online/tweetitow and all kind of friends.

with Arianne and Liezel on separate occasions

Or, great things start with finishing beyond cut-off time and being “swept” by race marshals.

I only realized that I got a 21K kit the afternoon before the race. At first, I thought of just running the 10K route but Milo’s race has this “hi-tech” timing chip, I might look like I cheated when my chip would only record a 10KM route. That was my first ever Milo (half)marathon run, I didn’t like to have a “shady” record.” And, I thought the only worst thing that could happen to me would be “swept” (to be stopped from running for being beyond the cut-off time). It’s not really bad, it would be an experience!

Or, great things start with anxiousness.

Despite all the reassurances I gave myself, I could not help but be a little antsy over the mixed-up of the race kit. To calm myself before the race, I drank , not Milo, but what is best in Davao — coffee! One of the things I noticed in Davao is that any local coffeeshops know well how to serve good coffee. Thankfully, when the route passed by McDonalds, Bajada, to Victoria’s Mall, I felt calmer. The day before the race, I met with a few of the TDR (Team Davao Runners), and they brought me running this stretch of the road, a little way pass over SM Lanang and back. Thus, having familiarized a part of the route calmed me. I knew this part would be just be straight, with almost no uphill. It was reassuring to see Davao’s water district office which was introduced to me by the TDR when we ran the previous day. It serves as their water station. In case, water stations would be gone, I knew where to get hydrated. (But of course, it did not happen.) To hopefully record a faster time, I had to give up “sight-seeing” and getting “overly friendly” on this race, which means as much I want to accept a few runners’ invitation to join them and had a chance to chitchat with them, I had to politely drop them or me off. I had to stick to my “best” pace. Kathreen. One of the runners I wish to pace with but I just could not match hers.

To save time, I also had to keep reminding myself again and again to not take pictures, which was very hard to do as it was my first time to be running in Davao. I also had to make exception with this sweet running couple, the cheering band of Team Titans, the water station and the support crew.

Maybe because it was a “big” event that it was such an orderly road race in a city. Or maybe because Davao City has these big wide roads that they can afford to cordon one lane, giving the runners much space and don’t need to worry much about being hit by cars. Or, I guess Davao City is just like that. Or, great things start with hushing the whiny voice inside our head.
Then 3km to the finish line, I just want to be swept by marshals. Maybe I was tired, or because I was in a route I was no longer familiar that I just wanted it to end. I kept waiting for a mobile car from the organizers that would pick me, but somehow none came. Since no sweeper came to save me from my agony, the other best way to end it is to hush that whining voice inside my head, eat the pain, and just speed off – always works!

Or, great things start with a bit of frustration at the end of the finish line.

But despite all the strategies I implemented with matching desperate “warrior-look” at the finish line and the best official 21K race time I ever got, I was still no Milo-medal worthy!

Well, at least I got the champion-look part! Medal is not really a problem when I can be surrounded with medalled TDR (Team Davao Runners). Funny how history repeats itself. The first time I had a chance to meet the TDR was at a race that I also did not get a medal. (We’ll be posting a separate story of TDR.) Or, great things start by disappointing our fears.

However it may end, win or lose, it give us something in common with the champions — we faced our fears. I bet those champions and top placers have also their own fears, it may be their rivals. In my case, it was the annoying excuses and scare tactics my mind were creating. Booyaaa!

“Eighty percent of success is showing up.” -Woody Allen

Congratulations to all the qualifiers of the 36th National Milo Marathon!!! Give us an inspiring race this December 9, 2012!

To the non-qualifiers, better  train harder for next time!!!

Big thanks to Kenneth and Honey Sai of Vantage Sports Promotions for accommodating our “remote” registrations.

If you have medal or none or maybe a collection of yarns from the turnaround points, please LIKE us at facebook.com/runroo, or connect with us at twitter.com/runroo.