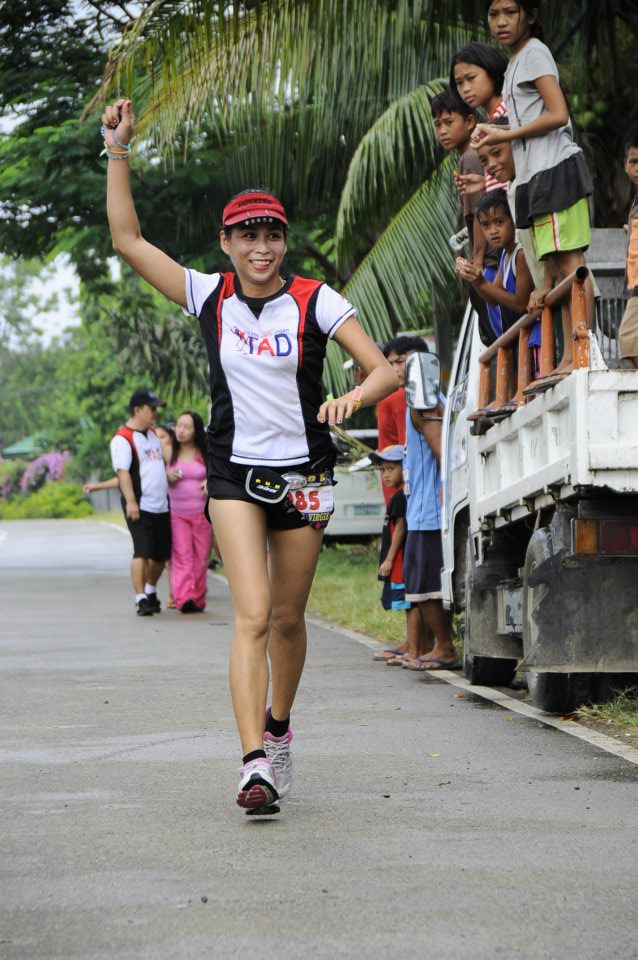 Virginia Parajenog is CUC (Cebu Ultrarunners Club) 100KM Leg 1‘s female champion. It was her 1st attempt at a 100KM distance race, and she finished it in 13:43 hours, putting her 11th on the overall ranking. Let’s just say 70 of the 83 official male finishers were chicked by her.

This coming Nov. 17, 2012, will she still be able to defend her championship title in CUC 100KM Ultra Marathon Leg 2?

Virginia Parajenog‘s fame in running can be liken to a typical Pinoy entertainment celebrity minus the drama of being poor and abused. While Charice Pempengco was joining every barangay fiestas’ singing contests, Virgie was also into joining sprinting competitions during barangay fiestas and the like when she was small for fun. But since running was not as popular as singing back then, there was not much follow-up to her running career especially when she’s a bit too old to join sprints.

As there was no Star Circle or PBB or maybe training camps for running back then, she got sidewayed to dancing.

It’s then where she got reunited with an old friend, running, and also meet other enthusiasts of it who then became her friends.

Reconnecting with her innate speed

In her 1st official comeback race, the Aboitiz Race to Reduce 2010, she joined the 5KM category. She was not part of the top placers at that race. But it made her realized that she has still the speed of a fast runner when she saw that the girl who overtook her in the last few meters to the finish line became the 10th placer.

She got more motivated when she also found out that she could beat male runners in races. This is to think that she does not train much as she has a retail business to manage, and 2 kids to take care of.

And so how does a businesswoman and a mother schedule her training? Simple. She only runs when she has free time.

But her typical training schedule is 12KM run every other day, then long runs of 20-30KM on weekends.

It’s not hard to explain why she is good at running. She acknowledges that she has a gift for running; that she is naturally built for it. And, she honors it back by putting a good performance on her races.

This 2012, Virginia seems to be doing a lot of very good performances in the ultramarathon scene. Though, she is consistently a top placer in every marathon and half-marathon she joined. But this year 2012, she rules the ultra marathon scene in Cebu.
* All Women Ultra Marathon 2012 gave her name more attention when she almost beat Merlita Dunkin, the ultra trail queen of Cebu, who was just 2-minute ahead of her.

* 2nd Labor Day Coast to Coast Ultra Marathon gave her the 1st championship title in an ultra marathon race. With the race route passing through a mountain highway with a killer uphill and downhill, winning it was a statement that she’s not an easy competition.
* CUC 100KM Leg showed that there was no stopping her. It set the tone that ultra races belong to her.

When asked what’s her secret in championing races. She said that her main strategy in finishing and winning races is to keep calm. To which she added, “Besides, who wants to look tired and ugly in front of the cameras.”

But looking deeper into it, keeping calm in races is not an easy state to attain. With having to deal simultaneously with the internal and external battles — impatience, pain, heat, etc — it takes a lot of you to get through it to remain calm.

Haggard or not, Virginia is effortlessly beautiful.

But, I believe it becomes easy for her to maintain calmness during tough races because of her faith on the gift of running that she has, As they say, by believing in yourself, you already won half the battle.

Cheers to Virginia, and all the women of CUC 100KM Ultramarathon Leg 2! To the boys, get ready to be chicked!

To get updated with stories and races, please LIKE our facebook.com/runroo page, or connect with us at twitter.com/runroodotcom. Next, we will be sharing 10 CCM (Cebu City Marathon) 2013 race kits.