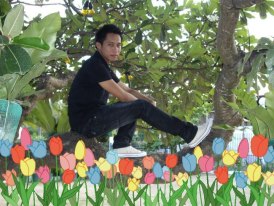 I believe that there are people who are naturally gifted with talent, and Jieter Bada seems to be one of those that is born to run… fast!

Being able to run with a speed of almost 10KM per hour may not be Kenyan-ish, but being able to sustain it for 100KM distance in 10 hours is something I don’t know how he makes it work.

I asked to interview him to see if he is a natural. I joined him in  one of his training runs for the upcoming CUC 100K Leg 2 to see if I could find the answer to my question. So I was in full running gear when I met up with him because I was expecting that I might be panting running after him. But I was disappointed, but also was very relieved, that all we did was run around in MEPZ 1 with his Indie friends for a birthday run.

Running with them around MEPZ 1 for a birthday run made me conclude that he is indeed born with a natural ability to run fast. Birthday runs for his training??? Seriously, my training runs for a 21KM are more serious than what he was doing at that time. But the world is unfair, and I’m no way in this life to get into his level with just birthday runs.

His running career could be traced back to his grade school days when his school had no representative for track and field games. Without much choice, he was “forced” to run so that someone can represent their school. And, it was not really bad for both as he won in 200 meters and 400 meters categories.

But since running was somehow a “discriminated” sport at that time, he moved on to basketball, volleyball and soccer. In soccer and basketball, he always got the forward position.

Then, he came to Cebu where he witnessed a lot of running events. At first, he would go to races as an audience.

Until, he had his first try of racing by joining the “swipe ID contest.” It was just a fun contest among his workmates at PENTAX, where he worked as QA. The mechanic was that they will run around the MEPZ 1 loop, and swipe their ID at the canteen; whoever would lose will treat the rest for food. His friends were surprised when Jieter came out first on his first attempt.

Thanks to the “swipe ID contest,” Jieter then became sort of a legend to his friends.

He watches weekend fun runs, not only to entertain himself, but also to learn. He would look at how the top placers run, and try to imitate them on his own. A simple idea of learning how to run but, I guess, it does not occur to most of us.

We could say that he started as a fan boy. He could tell in details how is Mendel’s running style different from others like a gadget geek would describe the differences between an iPhone and Android phone. He even bought Adonis Singson’s running shoes for keepsakes.

To work on his speed, he would add 20 minutes to the top placer’s finish time, which he would then use as basis for his practice runs.

His first official race was the 15KM Alphonsian run last year. It was when for the first time that he was no longer on the sideline watching the lead runners. This time he was already running along with the top runners whom he had watched race after race. But then his first official race did not come out sweet as he DNF’ed after he ran out of breath trying to catch up with the Kenyans.

But he did not stop. He then successively landed as top placers on the later races he joined in. I guess his fan boy-ing paid off.

A student of running forever

One of the things that probably makes him a good runner is that he constantly strives to learn more about running from his long-time trainer Robert Daang, constantly asking tips from other runners, reading online resources, and from experiences.

From his failed first attempt at Alphonsian run, he always takes every race as an opportunity to learn more. He learned about the right type of shoes when he suffered an injury on his 1st ultramarathon, the Labor Day Coast to Coast.  He realized that the shoes he was using at that time was only good for 21KM runs, which cost him the 2nd place at that time. And even if he won, it’s still a learning experience from him.

From winning the CUC Leg 1, he learned that he needs to work more on his core. 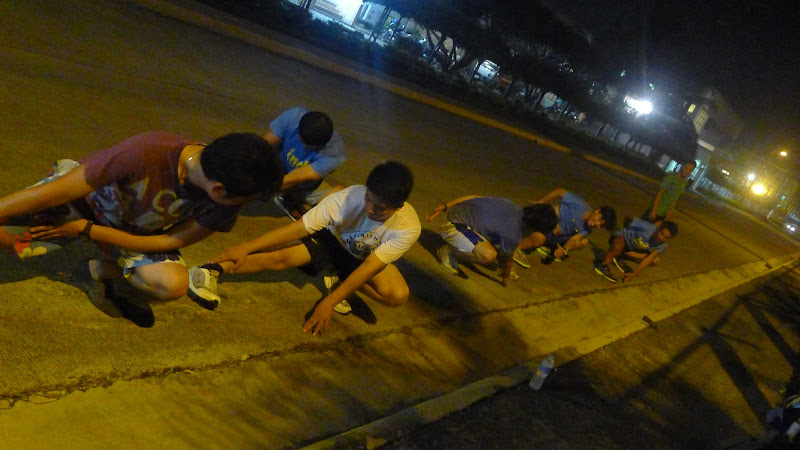 Indie runners; Jieter at the right

The icing on the top of the cake

Nearing the end of our conversation, I learned that he may not really be born with natural gift of running. He is probably just simply hardworking. It was a ray of hope for me.

He confessed that part of what made him successful at the CUC Leg 1 was that he would run after his graveyard shift at work until the heat of the sun would be beating down on him. It was a perfect opportunity for him to practice running without sleep, and add a twist of heat to it.

After all the inborn talent, form and speed, it’s that will to go the extra mile  that can make a runner stand out from the rest. In Jieter’s case,  his extra mile can be that impractical self-inflicted torture of sleep-deprivation and heat — to which we are all born equal to. Well,  not impossible for everyone to do. =)

Note: To his friends who were looking forward to the video interview, I’m sorry I could not include it here now. =( I realized I still have to do a lot of extra miles to have that talent of video producing.

Watch out for our next posts related to the upcoming CUC 100K Leg 2 and Hardcore Hundred Miles Ultramarathon this November 17, 2012.

Please LIKE facebook.com/runroo page, or connect with us at twitter.com/runroodotcom so as not to miss out our updates.