There were 181 women who signed up for the 1st All-Women Ultra Marathon in Cebu. Until now, I’m still puzzled and at the same time amazed at how could there be 181 women signed up for a 50k run. From the past few ultras I’d seen, it would be a lot already to see a dozen of female participants. It made me wonder what were they thinking, what were their husband / boyfriends / partners / friends / families / relatives were thinking.

Really, what were we thinking? In between the starting line and the finish line, here is my story.

The 1st All-Women Ultra Marathon (AWUM) had me at its poster. I find it romantic and dreamy! =)

The poster definitely tricked me to sign up for it. And, I think that it’s a given that Armie would be excited for this. A double treat that Odina nodded to this, and Jade, Odina’s sis (yes, they are sisters!) who did not need any much convincing, also joined in.

Triple treat because it was nice to see someone I met from another running event (or more of climbing event) came to Cebu all the way from Davao for the AWUM.

And, automatically, the runnroo and friends had not much choice but to assemble themselves and be part of the stationing support crew.

Before the race start, Mark asked me what’s my hydration plan and told me to prepare my ‘goodies’ bag. I told him that there’s no need for it because I felt that with all the volunteer support crew, the All-Women Ultra Marathon would be a big picnic.

Came the actual race event, it certainly was a one big Trick or Treat event. I picked a bit tight shirt in the hope that a few fats would leave me along the way making the shirt not too fitting at the finish line. But I think I got too much treats on the way.

I was mentally splitting the 50km race into 3 parts: The Sweet Treat, The Soursweet Treat, and The Trick.

At the Brgy. Busay turnaround.The uphill to Brgy. Busay was definitely a treat to me since it dispersed the pack of runners. I welcomed being separated from the group since I’m more comfortable running alone. With just 3 or 5 runners or none in sight, it made getting ‘into the zone’ easy.Also with being a lone ‘runner,’ I had a better chance of asking pictures with the different stations since the crews were no longer that busy.
Somewhere in Gorordo Ave.

Near Jollibee, at Osmena Blvd.

I was definitely still in a high mood that at this point, I don’t need much any ‘solid foods’ yet. The water and sports drink were what I all took from the stations. And, sometimes the bananas and chocolates shoved into my face were just hard to resist.

Somewhere in AS Fortuna

Somewhere near USC-TC Talamban, my friends were handling the the 8th station so I’m skipping posting a pic of them. =)

I finished the first 20km at 3hours 18min. It was a bit fast when I aimed to finish the first 20km in 4hrs. So I took off some 15-minute break. I changed shoes since a blister started to develop. It’s my first time to experience a blister. But I was still in a very good mood that it did not bother much.

The 15-min break was a way to trick my body and mind to restart and refresh to go fight the real battle. As we all knew, it’s the second or 3/4 part of the race where the real battle is — the trickiest part.

At KM25, those things I wanted to NOT happen started to creep in — tiredness and sleepiness. I was already expecting these that’s why I packed with me an energy drink. I drunk half of the energy drink I was holding, and hoped against hope that it would do me some miracles because it’s too early yet to be down in the bottom of the pit.

After here, the energy drink started to kick in, and I was back in the zone again.

At the crossing near Shell Station

Running over Marcelo Fernan Bridge was definitely a treat. I felt like I was on top of the world cruising.

This part when I was slowly falling and breaking into pieces. The other half of the energy drink nor music did not help much in holding myself together. The beautiful morning view from the Cansaga bridge did not help either.
At this point, I just took any thing the stations offered me in the hope that it would give me the ‘kick’ I needed to get me through the finish line. I guess, in a way, it helped.
Before going up the Cansaga bridge

After going up the Cansaga bridge

I want to thank Popoy, in blue shirt, for out-of-the-blue ‘pacing’ me from Fernan bridge. He was just having his usual Sunday run when he went out of his way and paced me almost to Karancho. Maybe I looked that desperate. =)

Then, I had the meltdown upon seeing the hub and friends stationing somewhere in the airport strip area, around KM45 (what’s with last 5km that it always makes me cry?). I just needed to cry to release all the tensions, and to have back a grip of myself.

Pic is from Yendy’s pics. I could not find them in my phone pics. I think the person who took it using my phone did not know how my phone works. I’m a bit sad of not having a pic with them. =(

(There were probably more stations that I failed to take a pic.)

From the last station, everything just became a living-in-the-moment. It was a stretch of falling and picking up myself again and again.
If every thing was too much to handle, I just bow down my head and appreciate that my feet were still moving. I would try to remember the people I dedicated this run to (the tough single moms and Glory Reborn), the ladies of the Great Wall of Tilhaong. I’m certainly no better than them, but that kept me moving because they made my struggle such a wuss. From now on, I will not call it dedication but instead a ‘shoutout;’ a shoutout of celebration for their being extra tough and special.

Then, look up and try to appreciate the sun or whatever activities that surrounded me. Be grateful. Then, cursed the RD where the f*ck is the finish line!

Funny how I dreaded this tricky part to happen. Most of us would run / train miles and kilometers to avoid this part. But looking at it, this is what made us and the experience crazy beautiful. (Thank Reynan for these last stretch pics. I’m inviting you to watch the whole album where you can see the true beauty of a woman, click here >>.)
So watch out, tricky part! Next time, I will seek you and face you head on! You can crash me, break me, but I will not get tired of picking myself up. =)
That’s my story. As usual, I still don’t know why I run long distances. Maybe because I love the awkward looks in my pics!
——————–
Sidebits:
Proof that I had way too much treat, and that really it was an ultra picnic: my tummy was bloating much bigger in the finish line than from the starting line.
Serious runn(roo)ers finishers with Ungo founder, Max and Marlene Limpag. If there’s too much running in this island, these 2 and the Ungo are probably one of the reasons of spreading the virus. And, they also make running less terrifying — as if you’re just going to a fastfood. =)

From us, 50KM of thank you to all the people and volunteers behind All-Women Ultra Marathon. There were a lot of people I miss to have a pic with. These are few of the faces you’d usually see in running events, which makes long distance running less scary. 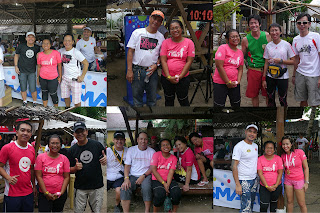 Cebu City Marathon 2012: It’s Not About the Cebu, It’s About the People
Runnroo: 1st All-Women Ultramarathon