Being a Cebu resident ever since of my life, I, honestly, did not see any motivation to run around the roads of Cebu City and a little extend to Talisay City. I’d felt it’s ‘bidli’ (like a long nail scratching against a blackboard). Being a southern girl, I’ve passed SRP a countless times; I could still remember how giddy I was when it was newly opened. IT Park is like our second home. Jones, Osmena Blvd, Colon, Sto Nino Church, Fort San Pedro, Mango Ave — they’re main staple of being a Cebu resident. Except for having the bragging rights of being able to pass on foot the only subway tunnel of this province and having my 1st marathon experience, there’s nothing much I really looked forward to running Cebu City Marathon.

In a way it was good because it helped to lower down my anxiousness. Except for the cut-off time they imposed in subway tunnel, which was something like 5hrs and 30 mins, I was not really that scared of running (if ever my pace can be called running) it. I may be slow, but I have no problem finishing whatever distance (less than 80km. hehe) even if I had to crawl for it.

So for Cebu City Marathon, I just had simple goals.

* To finish, enjoy, run it on a very relax manner.

* So to be able to finish it, I should escape to be forced to DNF in the subway tunnel, which could be considered my very main goal.

* To take pictures of as many “celebrity” runners.

First goal. Looking at this goal, I think I really have no right to have this kind of goal. Unless I was that one participant (Mohandas Kandiah) who have run 148 marathons, it’s just impossible to be relaxed on my 1st time. I mean that though I run on a very relaxed pace compared to a real marathoner, it was already the most of myself.

Second goal. My first goal and second goal are actually quite contradictory (I just also realized now). With the imposed cut-off time at the subway, as I mentioned, there’s just no way I could relax.

I think the only thing that matters to me during CCM 2012 was to be not be picked up by the DNF bus before the tunnel. I was just sooo happy to have accomplished it. I had to ask those two volunteers to take a pic of me. And, they were just too happy to comply as they’re probably bored already with the thinning numbers of runners passing.

By the way, those things raised are arms. They’re not elephant trunks. 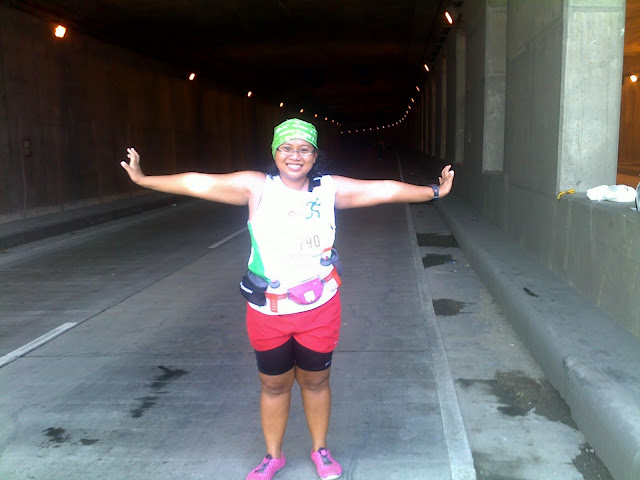 The imposed cut-off time, though I hated it, was a very good factor for me. With it, the CCM 2012 was the fastest run I ever made in my whole entire running career of 5 months!

Third goal. Since I arrived at the very tail-end, most ‘celebrity’ runners were all gone at the finish line. No one to take picture with so I just have to contend with my celebrity friends.

I spotted one celebrity Ondoy at the turn-around area, but I was too wasted and star-strucked.

But I spotted Anton Krupicka at the tunnel. Rumor has it that he has a pinay girlfriend, or was she his lost long twin. He did not wear any of his NB shoes to avoid media attention. And to perfect hiding his real personality, he wore a Cebu-made huarache KAI sandals. He also registered with a Filipino-ish Chinese-ish name, Paolo G. Lim. For the girl, I want to protect her identity so I won’t mention any real or fake names of her.

Sorry, it’s blurry so I don’t think this cannot be considered for my 1st goal. 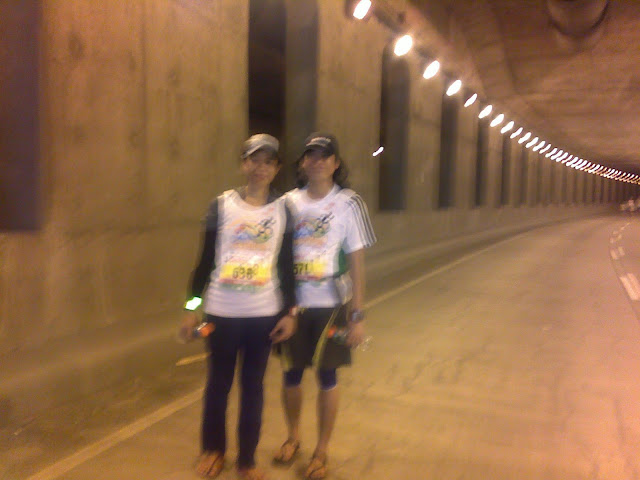 But I also happened to pose with with a top (half) ironman, Ralph Sios-e. But I’m not sure if this can be considered ‘picture with celebrity runner’ since he’s not really a runner. But just so I can achieve my goal, I would consider him. 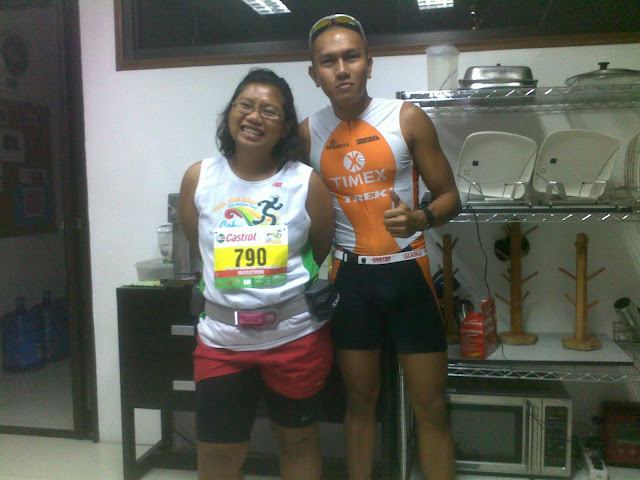 Aside from ticking out my goal, as I expected, there’s nothing really outstandingly interesting to look forward to from a Cebuano’s viewpoint. But still the organizers were able to make it very interesting:

* from the design of medal. It just shows how creative Cebuanos are.

* the ‘quotable quotes’ along the way

* of course, there were also ‘main’ marshalls , who were quite experienced, manning aid stations, and who knew a lot what the runners’ need.

And, I felt there’s always something magical with the Sto Nino of Cebu. The only explanation I could have for such a great weather during the run was that it must be a gift from the baby Jesus. And, also the reason why my feet’s soles were left unscathed even with the holes in my shoes’ soles. 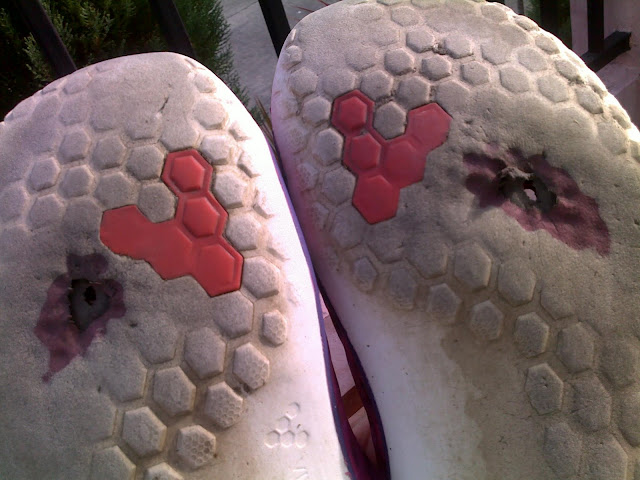 It was in Plaza Independencia when I discovered that the soles that I inserted to cover up the hole of the sole of my shoes also got holed-up. I was already on the very edge of myself, and so any little uncomfortableness would magnify a million times. So the little piercing from the stones, rock, pavement I’d feel on my sole was scary and annoying. When I passed by the Sto Nino Church, I asked God and Jojo (the cousin who recently passed) to please remove those little stones that would get inside my shoes, and to please protect my exposed soles from getting hurt. I kept myself from inspecting my soles which felt sore already for fear that I would see blisters on it. But after the run when I inspected it, there’s no sign of any blisters or redness on my sole. Thanks a lot, Sto Nino and Jojo. May himala!

So I may have not any appreciation for the route, but it’s just wonderful to experience the people, the us, on that day. So I guess, if you want to experience both the people and place of Cebu, Cebu City Marathon is one way to have it.

So, yes, I did finish the Cebu City Marathon 2012! It was the husband and my first marathon! His story here >>. We did not run together because we’re way better off on our own. I noticed I tend to be more whiny when his around, and I hate whining because it’s such an energy waster. So we’re better off having separate lives during runs to save my energy. Then, just have a laugh over at each other’s war stories after.

So what are my tricks to this marathon or any run?

Having previously run a more or less the same distance of a marathon before, I somehow had an idea of what demons to expect from 42.195km — physically, mentally, emotionally, spiritually, whinely and other ‘ly. In my case, no amount of mileage you logged in before can ever stop these demons from appearing somewhere down in the road.

One thing I learned is that the only way to get through these demons is to just keep moving — of course, this is very common sense. So my rule of thumb is:

* Avoid stopping. Stopping will only prolong my agony. Of course, you know when there is a real need to stop. It’s also good to stop to re-strategize.

* Do not avoid whining. NEVER EVER whine. It’s the most useless thing to do, and energy waster. We cannot avoid that when we get too tired, little details will magnify like — maybe it can be “I should have done this and that” / “This is painful. I should pity myself” to “The water stations are inept” or “The organizers suck.”

* Instead try your best to be grateful even if there’s nothing to — like how beautiful the weather is; or bully yourself to be believe how great you are to reach xx km.

* On very desperate moments, I bow down my head and just concentrate on moving one foot forward. It makes things simple and less complicated. (So if you see me with my head just looking at the my feet, it means I’m in my lowest lowest point.) It’s one of the things I love about running, when it forces you to  just live in the moment.

* Pretend play. So that demons cannot enter my mind, I’d fill my mind with pretend play. I call it ‘autistic mode’ because I’d create my own world. At SRP, I happened to play my kpop / hiphop list so I pretended that I was some part of a music video with Taeyang or Usher.

And, my mantra “I’m stronger than you, pain.”