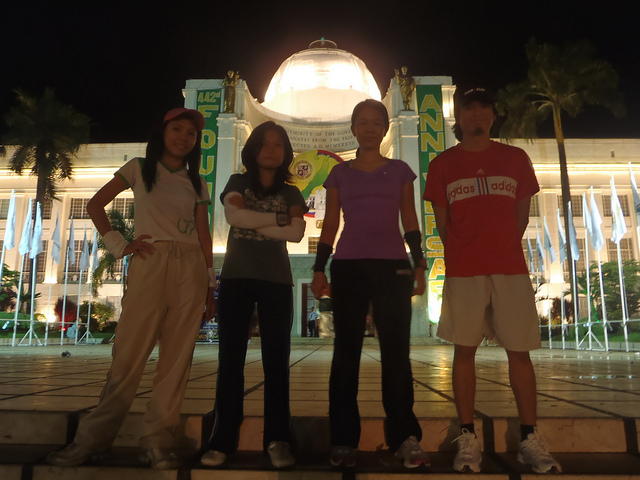 Running for more than four hours — almost six kilometers per hour — breathing in pollution coming from buses and big trucks along the national highway, wiping my sweat and dust-filled face, feeling the pain creeping in, and wondering whether I could make it to the finish line or halfway — these are all crazy thoughts.

But seeing places and corners of the city I’ve never been before, reading signs, directions, and posts on establishments with funny names, anticipating coastal lines, green mountains, cleaner and less polluted roads, seeing other runners and bikers along the way, talking or laughing with my fellow runners, hearing encouragements, expecting a good food and good place at the finish line, having a quiet me-time while on the road, having all the time in the world to think about everything simple, noticing the smallest and seemingly uninteresting thing there is, just waiting for that garmin alarm to tell me it has been four minutes and it’s time to walk — these things made the run so much fun.

It was funny because in the last 500 meters, my eyes were fixed on my garmin as I took the last few strides. I wanted to stop exactly at 25 kilometer. When my garmin told me I’ve run 25K, I stopped, laughed at my self and felt stupid and proud at the same time.

I looked at my fellow runners, Armie and Odina, a couple of meters ahead sitting on the grass and also smiling,  and Joseph and Paolo who were behind and catching up.

I wanted to savor that moment, I just stood there for some time, beaming at myself, ‘I finished that 25k! Oh yeah!’ 😀

It’s pathetic, noob, stupid, whatever, but hey, it’s the longest run I had! I guess every marathoner feel this way every time they exceed their previous longest distance.

My longest run before this run was the Kawasan Marathon. I ran 21K and it was my first half-marathon and first official race as well. The last five or so kilometers of that run were accomplished walking.

So, after running that 25K, the feeling was great!

When we were done hugging, thanking and bashing that 25K marker, we went back to the Naga Park to find a place to eat. Anything and everything tastes good after long runs, I realized.

Good thing, there are lots of food stalls and carenderias in their park. We decided to eat in the carenderia where the bikers we have seen were resting. The tinola, the crab meat, the rice, and even the Coke tasted good! Better! I could smile at everyone that time!

The wind was great! Sitting there after that long run, I thought, “I could just sleep here”. But I was still a bit high after finishing a 25K, so I wasn’t that sleepy. I just wanted to sit there in the shade and feel the air and talk with the Runnroo.

It was just nice. You exhaust yourself physically, and then find a good place to relax, appreciate things, and just feel great about everything. I guess these are just few of the great things I look forward when running.

The after-run feeling is just great. 🙂

…during our Tour de Cebu Stage 1, my longest run so far.

I just love this picture. Two perspectives: (1.) At 3am, those bed/couch/bean bag are still the sweetest place to be, but these crazy people chose to wake up and prepare to afflict pain upon themselves... haha! ; (2) No matter what time it is, 'tama' mode or not, Armie is always ready for picture taking!

After about an hour of running: In Talisay area, after a short stop at a bakery to eat and to refill our water bottles. This is not so runnable area, with all the traffics and sidewalk vendors and bad road.

We dont run all the way to the finish line. We follow a 4-1 pace, 4 minute-run, 1 minute rest. Armie and Odina here in a 1-minute walk in front of a coal-fired power plant in Naga area.

How do you read the name of this building? Depends on which country you came from. 😀

25K marker! I would like to think this is a troll marker. My garmin told me I’ve been running 25k already, but this marker hid itself in a row of stores, and devoid me of that victorious moment when I thought I already ran 25K because my garmin told me so. We found it nevertheless. We never stopped looking! After all, one of the main reasons why we ran is to have a glimpse of the yellow marker with a 25 engraved on it. Sweet!

The after-run. In Naga park, we ate lunch, savored each and every bite and sip, laughed at our own miseries, walked around a bit, sat and relaxed in one of the tree shades near the sea wall, talked about teenage lovers in one of the opposite shades, and of course, took pictures!:D

How do you read this? We found this in one of the jeepneys parked near the city park.

While waiting for a bus to take us home, back to that comfortable couch/bean bag/bed.